Cheers! To A Tour 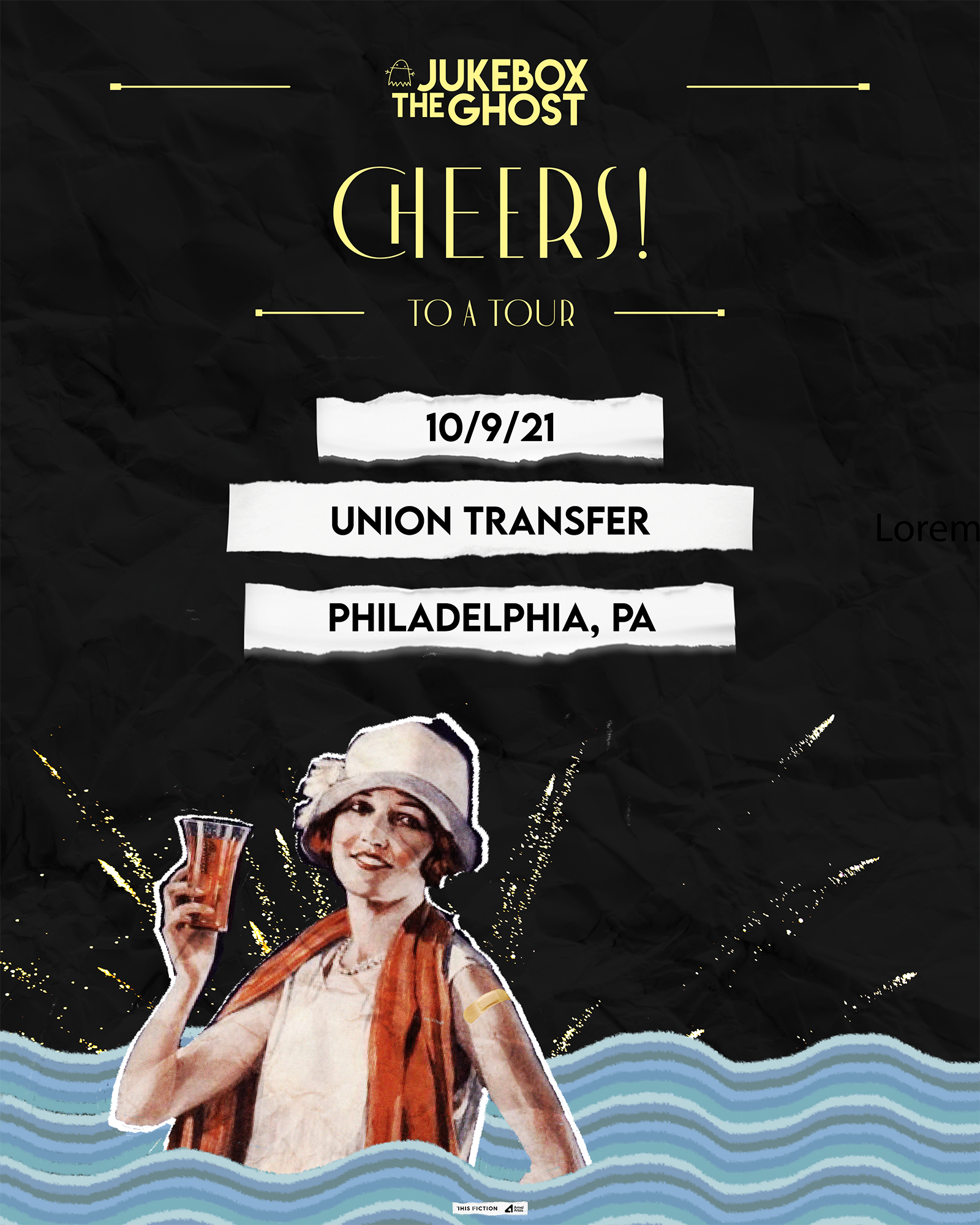 WE HAVE BEEN A BAND FOR ALMOST 10 YEARS. WE HAVE RELEASED FOUR ALBUMS. ONE OF THEM TWICE! WE LIKE TOURING. WE TOUR A LOT. WE HAVE PLAYED ALMOST A THOUSAND SHOWS. FOR A MORE DETAILED AND PROFESSIONAL BIOGRAPHY PLEASE CONTINUE READING.

From the opening vocal stack of “Jumpstarted,” it’s obvious that Jukebox the Ghost has newfound confidence in embracing bold musical risks. A mishmash of modern pop, retro vocals and classic rock indulgence, it’s a head-spinning listen for the first go-round that the band describes as “what it’s like to be inside of Ben (Thornewill, lead singer/pianist)’s brain.” A thickly-layered vocal intro builds into a showcase of Thornewill’s virtuosic classical piano chops and then abruptly vaults into a bouncy, upbeat pop chorus led by Jesse Kristin’s punchy backbeat drumming. A synth solo enters and you’re suddenly in a section vaguely resembling hip-hop. The guitar solo kicks the door down and you’re front row at an arena rock show. Thornewill recorded over 170 vocal tracks in “Jumpstarted,” and somehow you can hear them all.

One influence stands out in particular as a common thread: Queen. This isn’t a matter of happenstance — The band has recently made a tradition of “HalloQueen,” a yearly show where they perform two sets: One as themselves, followed by a set break, and one in costume (and in character) as Queen. Through being forced to do a deep dive into Queen’s catalogue, the band says they ended up discovering themselves in the process. “Something magical about Queen to me is that their songs are so catchy, but the song structures are so wonderfully wrong and they’re so unafraid to showcase their chops,” said Tommy Siegel. “Their music is a reminder to me that pop music doesn’t have to come in a neat, restrained package,” added Thornewill, “It’s ok to get weird and own it — And you can still be catchy.”

The second track from Off To The Races, “Everybody’s Lonely” provides a mix of old and new, evocative of Queen crossed with Walk the Moon. In addition to a distinctly modern pop chorus, it also features a surprising time signature shift and a bridge that has more in common with “Bohemian Rhapsody” than it does current radio morés. And though Thornewill’s lyrics thumb their nose at modern pop radio, it’s also easy to envision it becoming a modern pop hit in its own right. The third track, a snarky ode to the 9-to-5 from guitarist/singer Tommy Siegel called “People Go Home” sounds like you’ve tuned into some 1970s AM radio station that’s been humming along in a parallel universe for decades, an otherworldly early-Beatles-style track for the new millennium. The remainder of the record serves as a bright, exciting showcase of the band’s well-honed sense of pop craft, coated in thick harmony stacks that serve as a brand new instrument for the band, dramatic cinematic climaxes, and broad hooks that playfully nod to the past with a decisively modern sensibility.

Off To The Races is their fifth studio outing, mostly recorded at Studio G in Brooklyn and engineered, produced and mixed by Chris Cubeta and Gary Atturio (two exceptions: “Everybody’s Lonely” was produced by CJ Baran and Peter Thomas and “Fred Astaire” was produced by Chris Wallace). Longtime fans will hear little bits of past Jukebox the Ghost embedded in the record blanketed in a fresh, more colorful sonic palette. The flamboyance and quirkiness of Let Live and Let Ghosts (2008), the retro sensibility of Everything Under the Sun (2010), the concise modern pop smarts of their recent self-titled album (2014) and Safe Travels (2012) and the raw live energy of their live album Long Way Home (2016) are all on full display if you listen closely.

The album is the result of a three-year songwriting and recording process, culled from dozens of demos that the band brought to the table. Recording in their home base of Brooklyn enabled them to do more outside-the-computer sonic experimentation and live performance than past records have afforded. “In ‘Boring’ we sent Tommy’s backing harmonies through a distorting rotary speaker which created this totally weird underwater sound,” explained Jesse Kristin. “And for ‘See You Soon’ we ran an electronic tabla machine through an amplifier and then I played drums along with it. That’s the sort of thing I think we wouldn’t have spent the time to do on our other records.”

Jukebox the Ghost formed in college in 2006 and has been a steadily growing cult favorite and a globally touring band ever since. Composed of Ben Thornewill (piano/vocals), Tommy Siegel (guitar/bass/vocals) and Jesse Kristin (drums/vocals), they have played over 1,000 shows across the country and around the world over the course of their career. In addition to countless headlining tours, they have also toured as openers alongside Ingrid Michaelson, Ben Folds, Guster, Motion City Soundtrack, A Great Big World and Jack’s Mannequin, among others. In addition to festivals like Lollapalooza, Outside Lands, Bonnaroo, and Bottlerock, Jukebox the Ghost has also performed on The Late Show with David Letterman and Conan. Their 2018 national headlining tour will take them to their largest headlining venues to date across April and May.