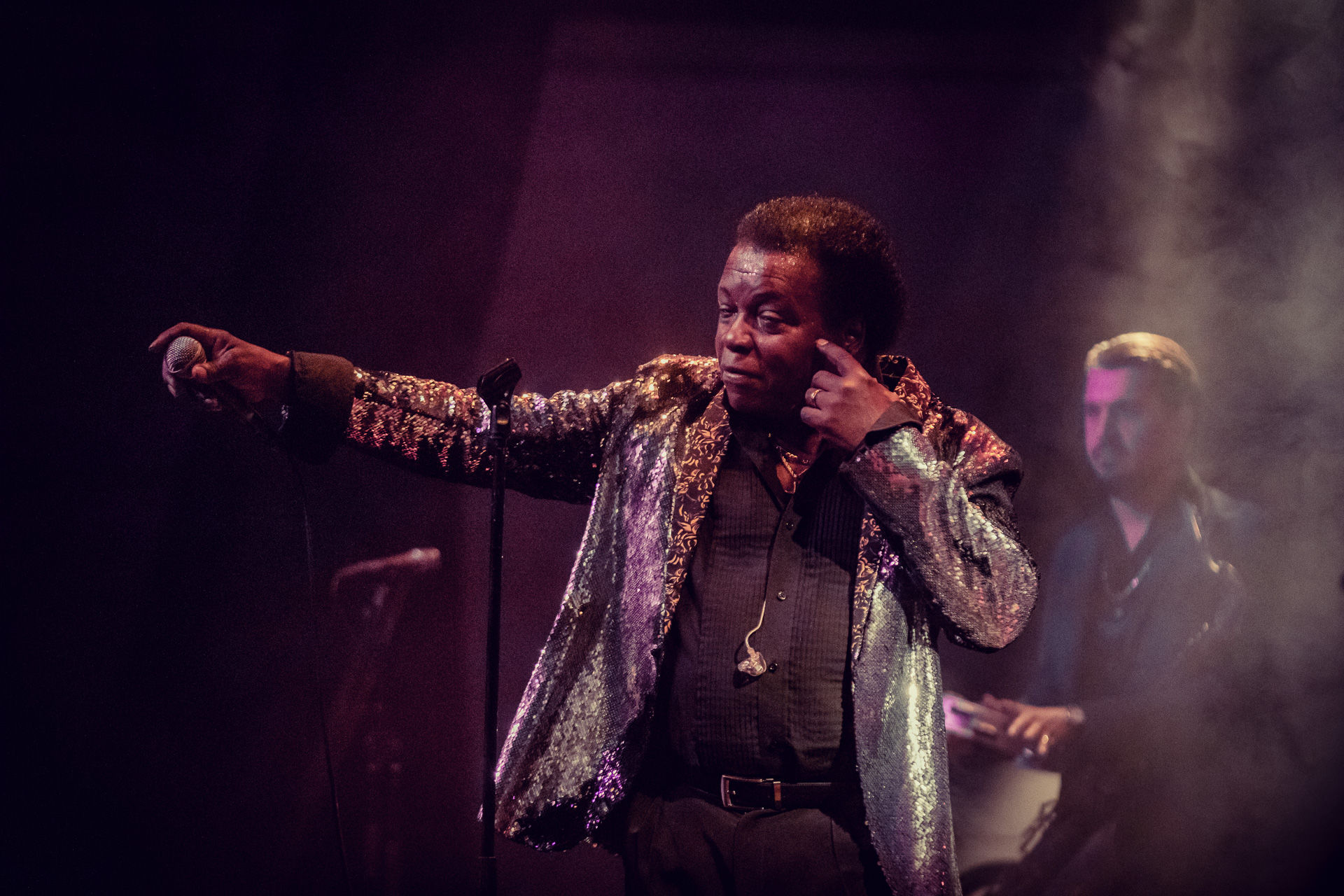 Soul music pours out of Lee Fields, as free and unstinting as God’s love. It has ever since the 1960s, when he was a teenager in North Carolina sweating it out on juke joint stages, crumpled dollars hailing at his feet. It continues now that the living legend is in his late sixties, ushering in the most successful and fruitful period of his career.

Like any living legend worth their salt, Fields has suffered despair, obscurity, defeat. Although he now tours stages around the world, and although he helped fellow soul legends like Sharon Jones (who was once Fields’ backup singer) and Charles Bradley (whom Fields took on his first tour) get their first break, he did not always have this position. There were years — they were known as “the 1980s” — when Fields nearly gave up. His success these days, then has a bittersweet tinge: His dear friends Bradley and Jones have both passed, leaving Fields to outlive them and carry their legacy forth.

With all these years, and all this life, comes a sort of divine wisdom, and Fields has it in spades. “I am a sinner, just like everybody else,” he says gravely. He is no “holier-than-thou guy,” he adds. He just believes in people’s ability to love and be loved, and he understands that music is the divine bridge to these places. “We should be conscious at all times of what is good and what is bad,” he tells me. “Once we lose that consciousness, we are deceived, we are tricked.” This worldview, equally stern and loving, rocksteady and welcoming, finds its fullest expression yet on It Rains Love, his latest and possibly his most earnest record ever.

It Rains Love is music of endless love, of endless hurt, of reverberating kindness and wisdom, of decades and lifetimes’ worth of pain alchemized into kindness. It is the warmth of a hand extended, grasping yours. His lyrics glow with an unearthly purity he has never allowed himself to touch before. He has never been a dictator, a la James Brown, but his longtime band the Expressions gave him free reign to do whatever he wanted. He ended up putting more of himself — his eloquent, peculiar self — into his music than he used to dare. As he puts it on the titles of the new album’s last two songs, “God Is Real” and “Love Is The Answer.” Taken together, they could be everything Fields has been trying to say ever since his recording career began. It is nothing less than his take on the human condition.

The love of God, in whatever form the divine mystery might take, radiates outward from the humid and joyfully relaxed arrangements of The Expressions. For Lee Fields, born Elmer, Jesus is Buddha is the Torah is the Bible is the love we feel for our families. “I am of Christian faith, but I believe God is all in all,” he says. “I believe any religion that tells you to do the right thing.” The music ranges just as wide, without ever losing its compass in soul: The deep echoes on the drums of on “God Is Real” hint at dub.

Only a true survivor could have made It Rains Love, and Fields is nothing if not that. Fields has been married to the same woman for 50 years. He lives in the same house. He is a man of deep and abiding faiths, and part of his bedrock comes from the moment in the 1980s, when his career seemed over. He had never gotten famous, and the gigs were drying up. It was time, he thought. There would be no more Lee Fields, “I thought I was done,” he says of the era when the soul music revolution of the previous decade seemed to beat a hasty retreat under the lacquered assault of new synthesized equipment and stiff, early drum machine programming. “I had almost literally given up. “He made other plans — he worked in real estate. He planned to open a restaurant. He settled into his role, not as Lee Fields, but as Elmer, the dependable and steadfast family man who underpinned his wild stage performer’s alter ego. “My wife stopped me, man, she told me ‘stick to what you know.'”

Today, he stands at the forefront of the soul revival, a bustling and ever-growing corner that has nourished the nutrient-starved waters of 21st century pop music with virtues it lacks: a sense of timelessness, of eternity, of a tradition extending backward into generations. Lee Fields music has been chopped up and sampled by hip hop artists as diverse as J. Cole and Travis Scott: Cole, Fields laughs, thought that the sample was taken from a song “from back in the day.” It wasn’t, in the strictest sense — Cole sampled “My World Is Empty Without You” and “Ladies,” which were both from Fields’ album My World, made in 2009 — in a deeper sense, it was true. Fields’ music doesn’t belong to Now; it belongs to eternity. He has been testifying, in the purest sense of the word, since Otis Redding was alive. He is living history.

The gentlemen who enjoy a fine slice, a fine libation, and an even finer haircut are known as The Jay Vons. The Word showcases how this rhythmic tour-de-force blends their love for ‘60s rock and soul with a deftness born from decades of obsessive record collecting and delivered by countless hours of writing and performing. The lead single, “The Word,” is a veritable blueprint for The Jay Vons’ sound: spooky organ, undeniable groove, tasteful guitar, forlorn lyrics, all seasoned generously with handclaps and percussion. Just imagine if The Brothers of Soul (Bridges, Knight, Eaton) produced a session by The Young Rascals and you’re getting warm. “Night (Was Stealing from the Sun)” picks up the tempo with a fervor reminiscent of The Jam at their best — punchy drums and sweet harmonies transform this earnest tale of a misaligned affection into a dance-friendly feast for the soul. “Changing Seasons” finds the band dialing it back a bit, settling into a breezy, mid-tempo groove. The string arrangement and soft, pleading vocal give way to an explosive, anthemic chorus whose hook-heavy horn line enriches the melody, creating a perfect piece of mid-sixties pop. Other highlights include: the gorgeous ballad, “Never Take Me Back”; the full-throttle assault of “Keep On Moving”; and the flute-kissed hit “Did You See Her.” This album is an exercise in how to channel the past without ever being trite. This is no facsimile. This is The Jay Vons.

Although their roots stretch from New Jersey, Manhattan, and Long Island, their meeting was no accident. Mikey Post and Michael Catanese have been writing and playing
music together since high school. They would later befriend Benny Trokan while living in Brooklyn, where Mikey would join Robbers on High Street. While all three were playing in various groups in New York, the guys wanted to start a new band together. They knew they needed that extra something. A man of speed, a man of action, a man that denies these times: Dave Amels. They would later find him on Lorimer Street, just taking in the views. After exchanging the old what-fors and who-are-yous, the group began writing and rehearsing together. Since then, The Jay Vons have toured all through the United States and internationally, opening for such legends as Sharon Jones & The Dap-Kings, Charles Bradley & The Extraordinaires, Lee Fields & The Expressions; recorded all of their original tracks at Daptone Studios, Dunham Sound Studios, and Diamond Mine Studios with producers Wayne Gordon and Tommy Brenneck; and, while making a name for themselves, have been backing up Greg Cartwright as Reigning Sound.

The Jay Vons are very excited to present their debut album The Word on La Castanya. They hope you enjoy listening to it as much as they did making it.