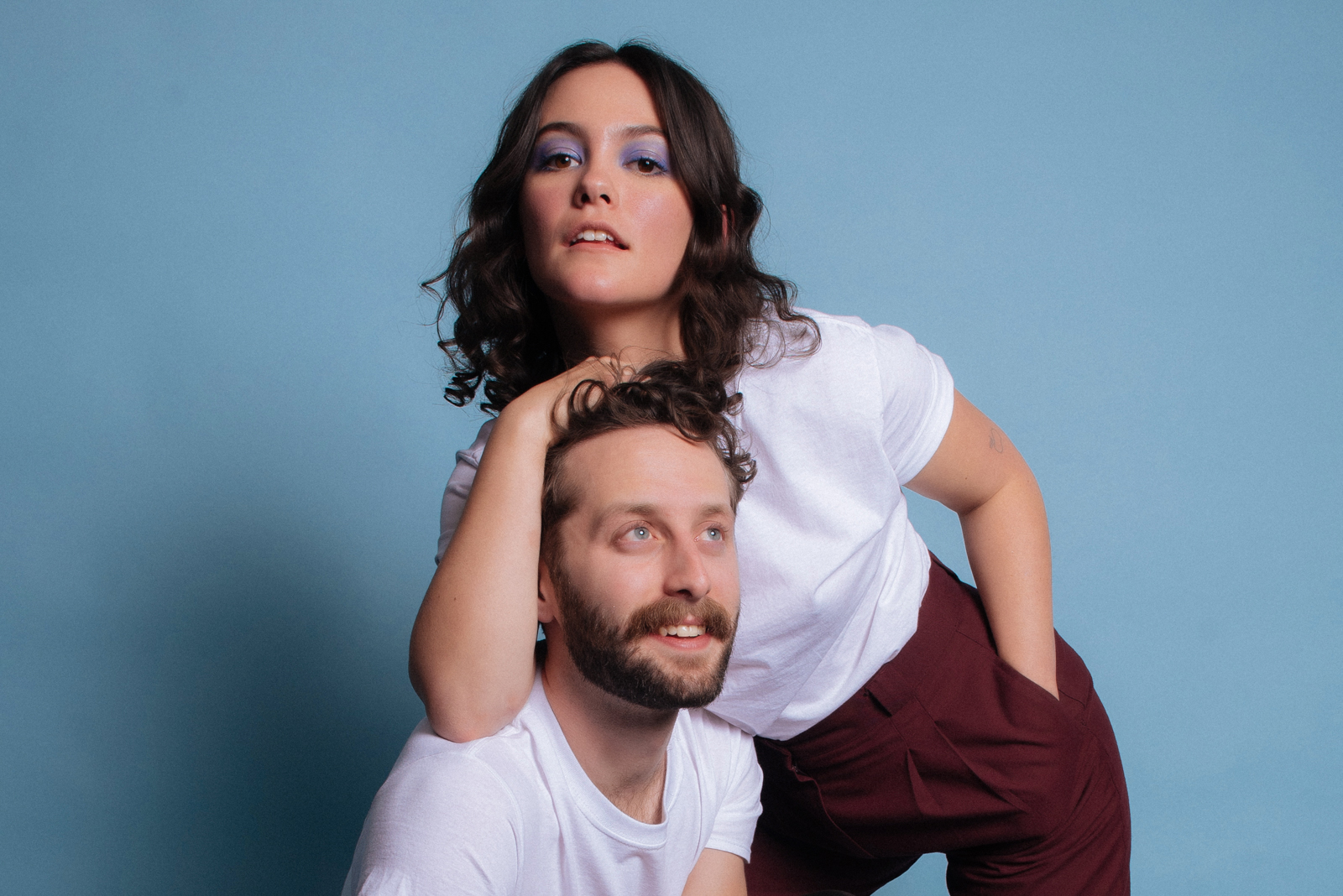 Buy Tickets
Wednesday, November 04
Show | 8pm // Doors | 7:30pm
$15
The originally scheduled May 14th show with Diet Cig has been moved to November 4th at The First Unitarian Church. Your previous tickets will be honored for the new date. You do not need to do anything different! If you cannot make the new date, we are happy to offer a variety of exchange options. Requests must be made by April 5th. For the quickest response, e-mail us direct at info@utphilly.com.

They’ve been compared to tornadoes, firecrackers, and lightning storms, and described as genuine, unapologetic, and down-to-earth. Their live shows are a whirlwind of belting and high-kicks, their pure energy as yet unmatched. Almost three years since the release of their debut album, Alex Luciano and Noah Bowman of gutsy rock duo Diet Cig are set to release their sophomore full-length, Do You Wonder About Me? The pair, typically on the road, took time off of tour to spend the better part of 2019 working on their follow-up to 2017’s Swear I’m Good At This. The new record marks a more intentional, self-assured Diet Cig; not only in Luciano’s radically intimate, acerbic lyrics, but in the duo’s sound as well.

Diet Cig formed in 2014 and went on to garner a cult following invested in the band’s special high-energy, emotional, super-catchy pop rock. Their very first EP, Over Easy, is basically canon in their world of hyper-honest, scrappy indie music. Swear I’m Good At This cemented Diet Cig as mainstays of the landscape, with its biting lines about social woes and prevailing message that it’s OK to be who you are. Luciano and Bowman moved to Richmond, VA in the summer of 2017 as a place to “hide out and make music,” and it was there that they wrote Do You Wonder About Me?, Diet Cig’s ode to growing up.

It’s very strange (“Or not strange at all! Hi!” says feminism) that most of the music we funnel into little girls’ ears—even music written by former little girls—is about how women are petty, pretty garbage whose only valuable function is to hold perfectly still in men’s boudoirs and wait for intercourse. “I wanted to make songs that were the opposite of ‘Genie in A Bottle’ or ‘The Boy Is Mine,’” Sadie Dupuis says of Slugger, her new solo album under the name Sad13. “Songs that put affirmative consent at the heart of the subject matter and emphasize friendship among women and try to deescalate the toxic jealousy and ownership that are often centered in romantic pop songs.” What!? Songs for women that actually champion women’s autonomy, reflect women’s desires, listen to women when they talk, and let women be funny and normal and cool, like women actually are?
After being born, which she totally nailed, Sadie grew up in New York City, toured internationally with a professional children’s choir, then bounced around Massachusetts before eventually landing in Philadelphia “like every other feminist punk.” She has an MFA in poetry from UMass Amherst, likes comics WITH AN ALL-CAPS PASSION, has written for Nylon and Spin, and is mega-beloved for her rock band Speedy Ortiz. Most recently, finding herself disillusioned with a lifetime of misogynist radio pop and yearning for the megalomaniacal autonomy of a solo project, Sadie/Sad13 churned out Slugger in a two-week fury.
Slugger is a pure solo effort. Sadie didn’t just write and sing and play guitar, she recorded and produced the record herself in a subletted bedroom in Fishtown—a not insignificant act of feminist defiance. Despite millennia of evidence to the contrary, women in music are still relentlessly pigeonholed as, essentially, decorative. Sure, you can be a girl singer, or a girl tambourine player, or, once in a while (the height of novelty!), a girl drummer, but a girl producer? A girl engineer? Cool X-File, Mulder! Sadie steers Slugger with a serene sure-footedness, vaporizing that old lie better than any howling polemic ever could. The best revenge is to do your work.
Slugger’s musical touchstones are vast and varied: contemporary pop à la Charli XCX, Santigold, Kelela, Grimes; folk songwriters Karen Dalton and Connie Converse; ‘90s trip-hop; riot grrrl (duh); plus Sad13’s feminist indie and punk contemporaries like Tacocat, Waxahatchee, Mitski, and Bully. Slugger shouldn’t feel like a revolution, but it does—in both content and execution. This is fun music about real shit.

Only two members of Philadelphia trio Thin Lips are related by blood. Nevertheless, when three people stick together for over a decade through endless tours, countless band incarnations, and hundreds of recording sessions, they may as well be considered family. At the very least, they will be seen together on major holidays; but instead of hiding presents under a tree, they’ll probably be playing a basement show in Duluth. This is the case for Chrissy Tashjian, Kyle Pulley, and Mikey Tashjian, known collectively as Thin Lips.
Spend some time with the Tashjian siblings individually and you will quickly notice their admiration for one another. They’re a long way from covering Korn songs in their parents’ basement after school, and now the pair in their early thirties can’t stop talking about how proud they are of the adults they’ve become–Chrissy ever the admirer of Mikey’s sympathetic heart and boundless goodwill, Mikey continually praising his sister for her relentless support of the queer community, as heard on the opening track of ‘Chosen Family.’
Enter Kyle Pulley, Thin Lips’ in-house recording engineer and lifelong Tashjian tourmate. Pulley grew close to the Tashjians during an extended stint at Big Mama’s Warehouse in North Philadelphia, a music collective that functioned as the original location of his burgeoning recording studio, The Headroom, and as a home base for Kyle, Chrissy, and Mikey’s first band. It was here that the trio learned to live together, cook together, and write together.
Naturally, the next step was touring. Eventually, as Chrissy, Kyle, and Mikey’s laps across America became more frequent, they realized that their once modestly-sized chosen family was growing across state lines. The love and tolerance they had learned in the warehouse was not insular; in fact, the trio began discovering like-minded communities of queer artists and musicians tucked into every corner of the country.
Fast forward to 2017, and Chrissy and Kyle are demoing songs for Thin Lips’ second LP ‘Chosen Family’ on a laptop, chopping up pre-recorded drum samples and arranging guitar parts. Whereas the songs on Thin Lips’ first album ‘Riff Hard’ were raucous, punk-driven affairs, this new batch of songs sees Chrissy focusing on purposeful, sharp guitar hooks; stripping away the gutsy solos and leaving more room for Kyle and Mikey to add thoughtful details to their expertly calculated rhythms. Chrissy and Kyle’s extended pre-production also led to the addition of some tasteful keyboard and synth lines throughout the record, most notably on the enormous chorus of “Smoking Is For Quitters.”
The recording process for ‘Chosen Family’ included assistance from longtime Tashjian co-conspirators Frances Quinlan and Joe Reinhart. The addition of Quinlan in the studio saw Chrissy, Mikey, and Kyle adding some unique flourishes to their rock-solid arrangements, like layered slide guitars on “Gaslight Anthem” and casually operatic background vocals on “So Stoned.” Reinhart, who mixed the album, helped the band create their most dynamic record yet by shaving off the rougher edges of their past releases and facilitating a clear, detailed sound.
Thin Lips show their age on ‘Chosen Family,’ perhaps most on “A Song For Those Who Miss You All The Time.” You can hear their decade of experience in the playful precision of Mikey and Kyle’s rhythms, in the clever push and pull of Chrissy’s singular guitar lead against the vocal melody, but also in Chrissy’s weariness as she reflects on the death of her younger brother Billy: “You were free of everything that holds us in our place.” There is a special power in the ability to name and identify life’s daily barriers, and to believe in the possibility of freedom from those barriers. Chrissy and Thin Lips have that power, and they use it to keep moving. They write songs, they make records, they go on tour, and they keep moving. And on ‘Chosen Family,’ they sound free.