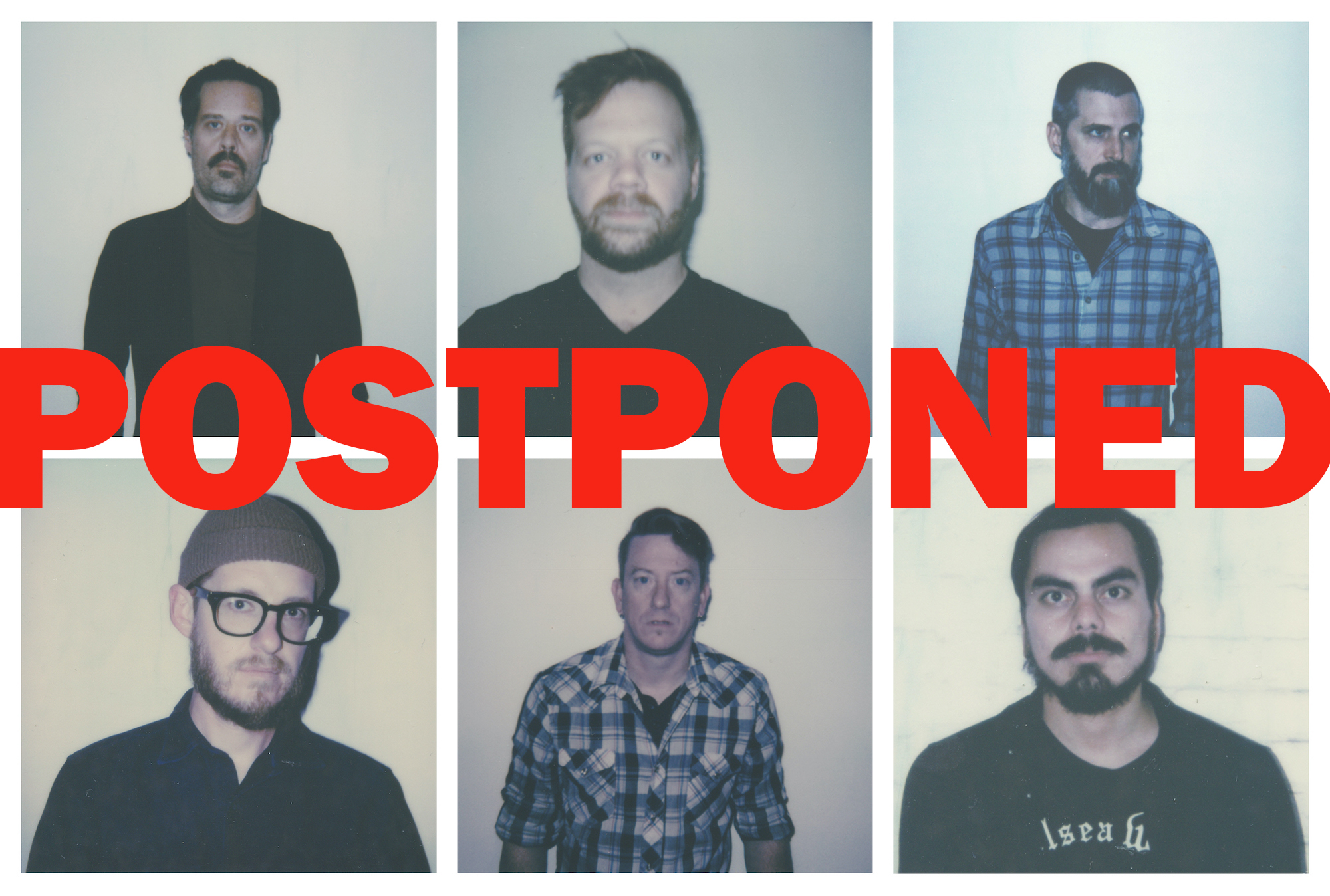 Postponed
Monday, April 06
Show | 8pm // Doors | 7pm
The April 6th Caspian show at Union Transfer has been postponed to a date to be determined - All tickets for the new date will be honored - If you cannot make the new date, we will refund your ticket - Please wait until the new date is announced (unless the original concert date has passed) to inquire about a refund - Thank you for your patience and understanding!
RSVP on Facebook

On their new full-length record, Dust & Disquiet, Caspian is saying something. “We’re wide awake now,” we hear in the album’s dead center, track five’s “Run Dry.” This isn’t the first time Caspian has sung a line of discernible lyrics, but the clarity-in the tone and thematic sentiment of both the track and the whole record-has never demanded so much attention.

In part, the line is a response to their last record, 2012’s presciently titled Waking Season-an acknowledgement that even they didn’t know what changes that waking process would mean. In the three years since, the band suffered the tragic death of founding bassist Chris Friedrich, and thus felt torn between grief’s desire to hide away from everything and yet knowing immediately that the band needed to continue. But going on meant maintaining a grueling tour schedule, with the members vacillating between elation and utter exhaustion. “Traveling can create a feeling of separation at times,” says guitarist and founding member Phil Jamieson. “After a while, you can forget why you’re out there in the first place. Deciding to do another record after all that was a move to reclaim for ourselves why it is that we do all this: Music is our strongest antidote to feelings of emptiness and disquiet.”

To record the album, Caspian returned to Q Division Studios in Somerville, Massachusetts, the stamping grounds where they recorded the highly acclaimed Waking Season (“the Best Post-Rock Album of Year,” said SPIN Magazine in 2012). They also looked again to the legendary chops of Matt Bayles (Mastodon, Isis, MONO, Minus the Bear) to produce, mix, and engineer the record.

2015 also marks a decade since the band’s inception. Ten years ago, Caspian played a show as a four-piece band at a small pub in their still-home base of Beverly, Massachusetts. After months of practicing before their first gig, never worrying about what it was they were trying to create beyond music that could tell a story, they arrived at a bombastic sound-guitars from Phil Jamieson and Cal Joss that sounded like a 40-piece orchestra, stripped-down drums that showed Joe Vickers could literally control chaos, and a bass sound so big from Chris Friedrich it blew amplifiers almost as often as he changed notes.

Their sound only deepened and thickened over the years with the addition of guitarists Erin Burke-Moran and Jonny Ashburn, and touring-cum-permanent bassist Jani Zubkovs.

With a sound this expansive, lyrics were simply unnecessary. And yet, 673 shows after their first appearance and on the advent of their fifth studio recording, Jamieson still says, “I view us as storytellers and musicians equally.”

That focus on narrative has continued across all of their albums, as otherwise the band would risk becoming a parody of themselves and the post-rock genre they’ve always acquiesced to with crossed fingers behind their backs. “We can do soundscapes, reverb-drenched drones, and songs based around a repeating melody that build and build for 12 minutes until we are blue in the face,” Jamieson says. “It is trying to convey a story through song structure, use of melody, and dynamics that has been the driving motivation from day one for this band.”

There has always been a fluidity to the arcs in Caspian records, where words like story and narrative held a loftier, mythic place in the movement to each album. We’re invited to enter and exit on our own terms, using the music as a railing to help us wander the dark hallways of our mind. The declarative title of You Are the Conductor (2005) announced that the music would take the listener on a journey, but where things went would be determined by the mood and circumstance of the listener. Each subsequent record refined and pushed the sounds into more surprising territory, showing the band’s ability to craft structures that the listener could inhabit-The Four Trees (2007) with its skyward glance, Tertia (2010) with its fists in the dirt, and Waking Season (2012) looking for the human in the machine. Raw emotion was always present, but it remained aloof, undefined. You felt it, but the feeling would dissipate just when you thought you could name what it was you were feeling.

But with Dust & Disquiet, the story has changed.

As much as grief wishes to be private, the passing of bassist Chris Friedrich left an indelible mark on the band, and it’s impossible not to see stark traces of this tragedy across the album. The whole of the record transcends their personal grief, but as Jamieson says, “It is and always will be, now, an underlying core to everything the band creates.”

They are forever marked by loss, but not defined by it.

As such, Dust & Disquiet showcases a maturation of the quiet/loud dynamic that Caspian has been exploring since their debut EP, You Are the Conductor. Now, that dynamic extends beyond a matter of volume, suggesting a more figurative exploration of polarities such as dark/light, dry/wet, and tired/awake. And these elements are not limited to one elongated track, but rather stretch out over an ambitious and yet patient album that opens with horns and a string quartet (“Separation No. 2”), riffs on the wilder, steel-eyed side of country (“Rioseco”) and classical (“Aeternum Vale”), all the while staying true to its epic brand of build-and-release rock (“Arcs of Command,” “Dust & Disquiet”).

On a first listen, then, a track like “Run Dry” might seem surprising for a band that, for the past ten years, has relied on their textured and explosive style of instrumental music to tell their story. And while this acoustic ballad is noticeable simply due to its unique sonic profile among the band’s catalog, there is a sobering quality that holds the listener in place. We are brought into their present moment, and we remain there indefinitely, even if the song only lasts less than five minutes. It may sound calm, but there is tension in the song’s desert air stillness. In the end, the track becomes a piece of an album that is the widest expression of the kind of connective work Caspian has been up to since the beginning.

It’s for this reason that the diversity of Dust & Disquiet-from the horns and string quartet that open and close the record to the primal honesty evident in tracks such as “Echo and Abyss” and “Darkfield”-bluntly assures they need no parlor tricks in order to keep their particular brand of instrumental music fresh. “The record has a genuine sincerity to it,” Jamieson says, “because we are still using the creative act as a weapon to combat feelings of emptiness and isolation. It is still a mechanism used toward connection to one’s self and to other people in an age of increasing separation.”

And that work is palpable throughout Dust & Disquiet. Images come into focus-the physical world and the world of imagination are one. Most of life is set up to break that connection, but Caspian is wide awake now, and they are expressly in the business of reconnecting.

Wait For Love, their fourth album, sees Pianos Become The Teeth taking another sonic step forward to craft a musical statement that truly transcends genres. The Baltimore natives have produced a collection of songs that feature lush soundscapes and a more nuanced and melodic sound when compared to the screamo- aggression of their early work.

Fans who have followed the band’s trajectory—from their 2013 split with Touché Amoré—can trace the way the band’s sound has evolved from a melodic screamo act to a group that create heaviness and weight via raw emotion instead of distortion and dissonance.

Formed at the edge of the new millennium, Maserati is as sleek, sophisticated, and supercharged as the legendary Italian sports car it takes its name from. It is fitting, then, that the band has dragged the glory years of psychedelic arena rock kicking and screaming into the 21st Century, with the pomposity (and vocals) carefully removed. In its place are white hot flashes of light pulsing to an unstoppable rhythm that will make you want to punch air and drive really fast in a car with wings instead of doors.