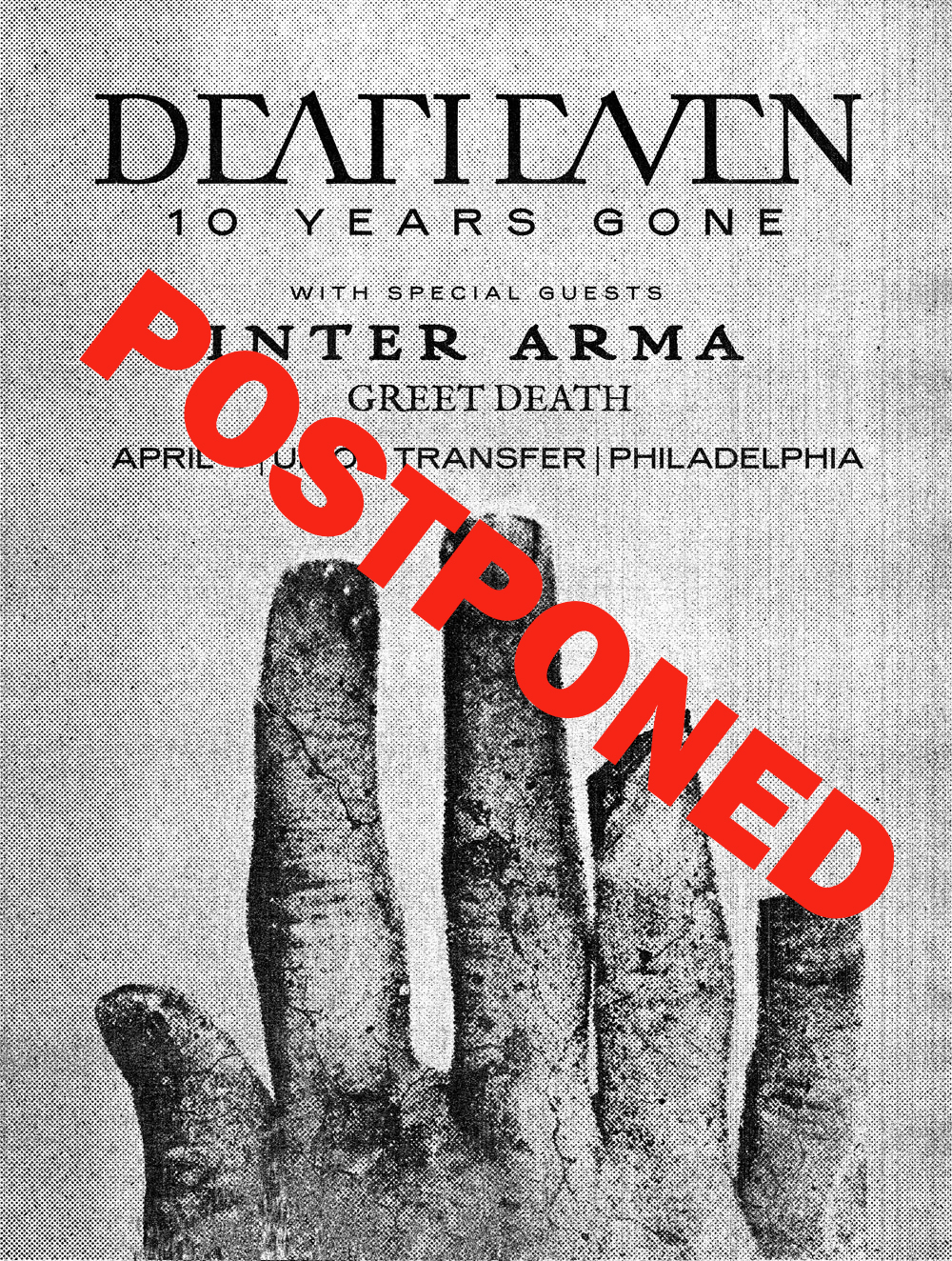 Postponed
Saturday, April 04
Show | 8:30pm // Doors | 7:30pm
The April 4th Deafheaven show at Union Transfer has been postponed to a date to be determined - All tickets for the new date will be honored - If you cannot make the new date, we will refund your ticket - Please wait until the new date is announced (unless the original concert date has passed) to inquire about a refund - Thank you for your patience and understanding!
RSVP on Facebook

Deafheaven is a California-based act that has garnered acclaim for their signature hybrid sound of black metal, shoegaze, and post-rock. On October 2 the band will release their next album New Bermuda on ANTI-.

George Clarke (vocals), Kerry McCoy (guitar), Dan Tracy (drums), Stephen Lee Clark (bass), and Shiv Mehra (guitar) recorded New Bermuda live to tape at 25th Street Recording in Oakland, CA and Atomic Garden Recording in East Palo Alto, CA in April 2015. It was produced, engineered, mixed, and mastered by Jack Shirley who has worked with the band on their previous releases. Clarke says that he came up with the idea of “New Bermuda” to describe a new destination in life, a nebulous point of arrival, and an unknown future where things get swallowed up and dragged into darkness. The album artwork for New Bermuda is an oil painting, dense in brush strokes of darker tones and deep blues, by Allison Schulnik. The layout was designed by art director Nick Steinhardt.

Formed in 2010 in San Francisco, California, the band has released two studio albums on Deathwish; Roads to Judah in 2011 and their lauded Sunbather in 2013. Sunbather received accolades from NPR on their Favorite Albums of 2013 list, a coveted Best New Music at Pitchfork, the Best Metal Album of 2013 per Rolling Stone, a 9/10 star review from Decibel Magazine, and it was the highest rated album of 2013 according to Metacritic. Deafheaven have spent the last two years touring extensively nationally and around the world with shows in Australia, Japan, Asia, Europe, Russia, the UK, and Canada with festival appearances at Pitchfork, Bonnaroo, Primavera, Roskilde, Fun Fun Fun, FYF Fest, SXSW, Basilica Sound Scape 14, Corona Capital, ATP Iceland, amongst others. Deafheaven will perform August 8 at Heavy Montreal in Canada. Details on a forthcoming North American tour are soon to be announced.

INTER ARMA‘s music resists generalization and categorization, but if there’s one thing that’s consistently true, it’s that the VA quintet possesses an unparalleled sense of scope. Few artists today accurately convey the complexity that INTER ARMA (Latin for “in times of war”) does – the band creates terrible and often hauntingly beautiful portraits of humanity through music that is deeply organic yet still mystical and modern. INTER ARMA are just as committed to the live circuit as they are to their records: the band has performed extensively throughout Europe and the US, sharing the stage with the likes of Kylesa, Baroness, Cough, Royal Thunder, Black Tusk, Ulcerate, Russian Circles, Windhand, and dozens of others. INTER ARMA‘s raw, uninhibited approach merges doom metal, psychedelic sludge, black metal, prog and more, and over the course of the last ten years, has established the band as a uniquely innovative force in contemporary extreme metal.

Founded in Richmond in 2006, the versatile and genre-defying five-piece released their debut full-length Sundown via Forcefield Records in 2010, and like all great artists, had a well-defined sound right from the start. Sundown found INTER ARMA widespread critical acclaim, and, combined with the band’s relentless touring schedule and DIY grit, quickly helped INTER ARMA make a name for themselves in the underground. Following Sundown, the band released the 12″ EP Destroyer via Toxic Assets Records. That record was strong enough to catch the attention of Relapse Records, who signed INTER ARMA later in 2012, and in 2013, the band unleashed the monolithic Sky Burial, a doomy, hour-long excursion through unpredictable textures and timbres. Just two years later, the band followed Sky Burial with The Cavern, a 45+ minute, single-song EP. Originally written during the summer of 2009, then slowly reworked and perfected, The Cavern was recorded in 2013 during breaks from the band’s non-stop tours. Both The Cavern and Sky Burial were widely hailed as some of the best records of their respective years and garnered INTER ARMA accolades from the likes of Pitchfork, NPR, Rolling Stone, and many other publications worldwide.

Two years after The Cavern, INTER ARMA are poised to return with their heaviest and most multifaceted work to date. Paradise Gallows is more than an hour of lush, colorful melodies and textures blended with the heaviness of the earth’s impending death. Like the band’s previous works, the new album Paradise Gallows is direct and foreboding while maintaining a nuanced, artful perspective. INTER ARMA‘s signature palette of dissonant high-end and abyssal low-end has been augmented with swathes of thick, impressionistic melody that lend Paradise Gallows a truly biblical sense of scale, both lyrically and in terms of the album’s sonic content. Harsh and acoustic passages (including the band’s first-ever foray into clean vocals) spar with complex rhythmic structures across nine sweeping tracks of expansive, progressive heaviness. The album was again recorded with Mikey Allred (Yautja, Hivelords) at Dark Art Audio in Nashville, and features gorgeous cover art by Orion Landau. Dense, funereal, and richly evocative, Paradise Gallows is a rich blend of doom, post-metal, sludge, and black and death metal, and is a singular and powerful new addition to the band’s already monumental discography.

“The Flint, Mich. trio exist(s) in a bloodline that runs from Failure to Hum to Deftones—bands that once tried to smuggle in sludgier, slower, and stonier forms of rock into alternative radio like joints at Coachella. But innovation, particularly in rock music, isn’t often the invention of something entirely new; it’s more likely a small and extremely significant tweak of an existing product. Most vocalists either mutter or mumble through this kind of music, buried in the mix and rendering any sense of “pop” theoretical or relative. Greet Death are pretty much the exact opposite of that. This is a remarkably tuneful, forthright pop-rock band that just so happens to play six-minute songs at bradycardic tempos.”