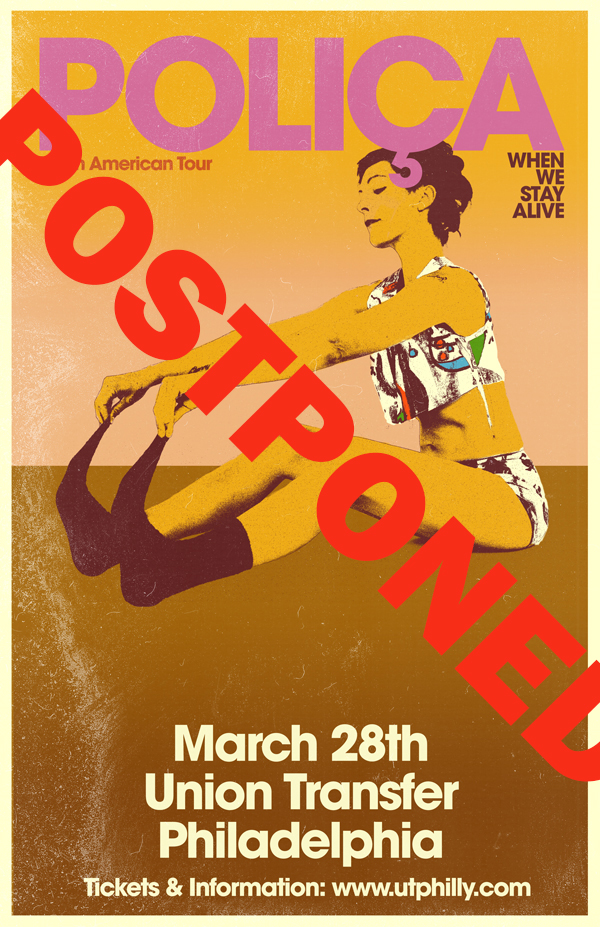 Postponed
Saturday, March 28
Show | 8:30pm // Doors | 7:30pm
The March 28th Poliça show at Union Transfer has been postponed to a date to be determined - All tickets for the new date will be honored - If you cannot make the new date, we will refund your ticket - Please wait until the new date is announced (unless the original concert date has passed) to inquire about a refund - Thank you for your patience and understanding!

When Poliça’s Channy Leaneagh fell off her roof while clearing ice in early 2018, she smashed her L1 vertebrae and battered her spine, leaving her in a brace with limited mobility for months. Yet Poliça’s fourth album, When We Stay Alive, is not about one debilitating accident. It’s about the redemptive power of rewriting your story in order to heal, and reclaiming your identity as a result.

While recovering, Leaneagh’s doctor told her to focus not only on physical healing, but to meditate on the mental act of healing as well – working to erase the anger, regrets, and fear she felt about her fall. To do so, he suggested she rewrite the story she told herself about what happened on February 28th. Left alone with her thoughts and her back fully braced, Leaneagh would visualize herself slipping and falling not onto cement, but instead onto a cloud, landing safely before breaking into a sprint over snow melting to reveal tall blades of green grass. As she felt the positive effects of this mental exercise, she set about doing the same for other injuries and pains that she gripped onto from her past.

Prior to Leaneagh’s accident, she had been setting music aside as she raised her children and worked to make ends meet as a nursing assistant. Now in the still silence of healing, she found that a multitude of feelings were becoming very loud. Leaneagh realized her

self-identity had become attached to her experiences of physical and mental trauma, and she began to consider what it would be like to live without the past as a burden. “I felt there were many things I could look at and say, ‘This happened to me but I’m okay now. It’s not happening anymore and I got the care I needed for it. Now it’s time to rewrite the story I tell about myself and to myself,’” she explains.

While half of When We Stay Alive was written before the fall, and half afterwards, the tracks meld together in a coherent and redemptive sonic whole. Those written before the fall relay ideas with a more heightened sense of anxiety and distress: the rousing “Forget Me Now” interrogates what makes two people bring out the worst in each other, while on the soulful “Steady,” Leaneagh struggles with the sudden pressure of becoming the head of her immediate family after her parents moved away. “TATA” was inspired by the challenge of keeping a cool head in the face of tense community meetings where anger continues to rise against Northern Metals, a north Minneapolis company under fire for pollution issues.

Inspired by the power found in her healing process, on the second batch of songs Leaneagh tried a slightly different approach, working to reevaluate her past, difficult personal experiences and bring in a sense of insight, strength, and light that perhaps wasn’t there at the time. The stirring “Feel Life” captures Leaneagh’s process of recasting pain as an alarm to live and see beyond what we lack. She takes back her sense of self on the haunting “Be Again,” a song recorded as she relearned to sing while wearing a brace. “For me this song is a meditation to myself,” Leaneagh explains. “To come back from the disassociation I’ve lived with most of my life.” “Blood Moon” sees her examining how keeping this sort of guard up can prove more precariously isolating than protective. “I can look back and see how music has always been here for me to be loud, say what I feel and ask for what I need in these songs I write,” she says. “I always find my courage again on the stage – that is where I feel alive, and for that I am eternally grateful for music and the people that I make it with.”

When We Stay Alive possesses a new confidence in its sound, reflected in its fierce, determined songs and anchored by the heavy synths and punctuating beats of Poliça co-founder and producer Ryan Olson. Over the last several years Olson and Leaneagh have widely collaborated with musicians from all over the world: both with Bon Iver, and Leaneagh individually with Boys Noize, Lane 8, Sasha, Leftfield, and Daniel Wohl; Olson with Swamp Dogg in addition to countless musicians from the 37d03d collective. As a result, When We Stay Alive features one of the largest musical casts of any Poliça record to date. To create the album, Olson brought his favorite collaborators into his studio for all-night sessions. He’d then send Leaneagh the files to write lyrics to while recovering at home, which she’d record alone or with engineer Alex Proctor. Drummers Drew Christopherson and Ben Ivascu colored the songs with a new approach – drastically changing the rhythmic dynamic from previous efforts by creating an indistinguishable hybrid of live and electronic instrumentation–and bassist Chris Bierden provided a melody-laden low-end as well as more layered backing vocals than ever before.

On Poliça’s first three albums, Leaneagh focused on restructuring the world and her relationships within it. On When We Stay Alive, she realizes the power in restructuring her inner self. The album’s title references the idea of moving forward through life – our experiences, both good and bad – and what happens next with the strength we find. “I had been living unconsciously in past trauma,” Leaneagh says. “I don’t want to deny something happened – this is not about repression – it’s about taking the power back from the past, holding the power in the present, and creating a new story for myself.”

Even in the frenetic metropolis of New York there are moments of still. You have to wait, bide your time until the early hours, but in the short window between closing time and the early-morning commuters you can find a twilight period of pure, nocturnal, solitude.

‘I Go Missing In My Sleep’ – Wilsen’s debut full-length album – was born during these snatched moments. Ensconced in a tiny rented apartment in Brooklyn, Tamsin Wilson would sit, wait for the twilight and then begin moulding her day’s thoughts into fragments of song.

Using a nylon-stringed acoustic to pick out gentle melodies she drew inspiration from this pre-dawn. The calmness and soundlessness. Everyone asleep and inactive. During these moments time slowed and creative threads could be following without interruption; without the fear of someone hearing her mid-process.

What slowly, methodically, took shape was a collection of delicate songs that valued, even cherished, the creative power of stillness.

The finger-picked melodies, dreamy whistles and Tamsin’s whisper of a voice, all of which underpin ‘I Go Missing In My Sleep’, were born during these moments of still, but it wasn’t until bandmates Drew Arndt & Johnny Simon’s involvement that the use of lightness and space was drawn into beautiful contrast with moments of post-rock ambition.

Coming together – alongside producer & friend Ben Baptie – initially in the UK, then upstate New York, before concluding at The Farm Studio in rural Philadelphia, the trio nudged and corralled each delicate wisp of a song, gradually layering it with washes of icy guitar, short staccato drums & Arndt’s restrained basslines.

The band’s previous offerings, 2013’s double-EP ‘Sirens’ & 2014’s EP ‘Magnolia’, had hinted at a creative trio wrestling to balance the folk intimacy of Tamsin’s hushed tones with a more muscular, experimental side. With ‘I Go Missing In My Sleep’ there’s a sense of much more at play than a mere delicate balancing act; this is a rich, dynamic mix that’s coalesced into a singularly musical form that’s pure, confident and unique.

From the opening creep of ‘Centipede’, a shuffling, eerie masterpiece that questions self-honesty, through the multi-layered fan-favourite ‘Garden’, buoyant on a bed of intricate finger-picking & recently surpassing 2.5 million Spotify streams, and onto the climactic ‘Told You’, this is a record of detailed perfection.

Announcing the record in early February with new track ‘Heavy Steps’, Wilsen will slowly begin the process of introducing the outside world to their moments of crystallised calm, before unveiling ‘I Go Missing In My Sleep’ in full in late spring 2017.

Forget the Quiet, things are about to get a little Noisy.