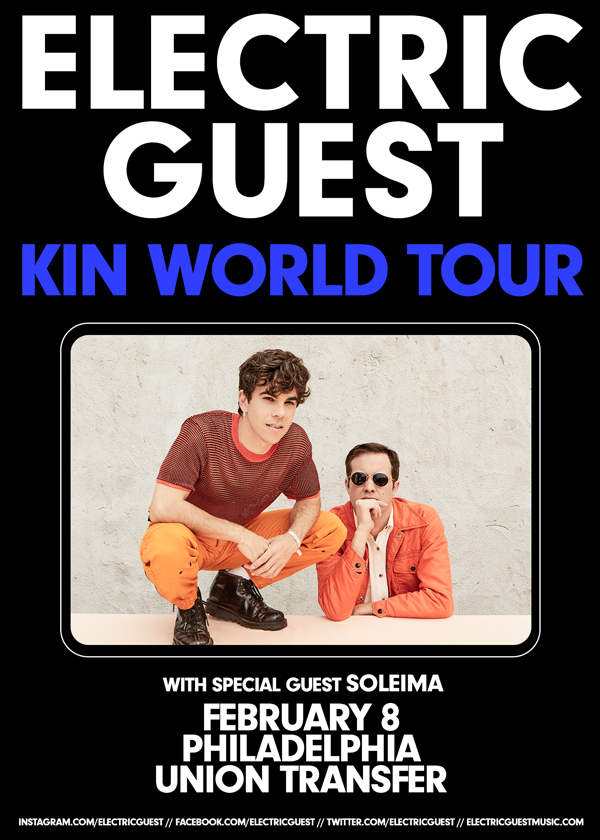 Co-writing and co-producing a Grammy Award-winning international hit is usually enough to make an artist’s ego visible from space. But for Asa Taccone of Electric Guest, working on Portugal. The Man’s inescapable, Grammy-winning 2017 track “Feel It Still”, as well as contributing a track to Carly Rae Jepsen’s Dedicated, was more humbling than ego-boosting.

“When you work with other artists and performers, you get to see yourself,” says the singer-songwriter, as his Electric Guest compadre and multi-instrumentalist Matthew Compton nods in agreement. “But you also get to have these intimate conversations with bands on their second or third albums, and you realize it’s not fun anymore. It’s hella stressful, and you find yourself over intellectualizing the process. I realized it was exactly the sort of thing I do.”

The question was, how to make sure it didn’t happen to Electric Guest. Their third album is the emphatic answer. KIN is not just another collection of songs for Electric Guest. It’s an overdue statement of identity. “We came up in the early 2010s when indie bands were where it was at,” remembers Asa. “We got lumped into that, but it was never really the right fit, so it’s been a gradual shift away from that. I think of us as more a pop duo.”

Forget what you read in a blog from 2012 and ignore what the “You Might Also Like” algorithms suggest. Electric Guest are proudly, defiantly, more Wham! than Weezer. From top to bottom, KINfeels like a warm, familiar haven, but scratch the surface, and you’ll find Electric Guest have hidden some lyrical weight underneath the positive vibes.

“At a certain point, the arts became about exclusivity and wealth,” says Asa. “Instead of hearing a song and breathing a sigh of relief, now it’s like ‘damn, I don’t have a girl like that, I don’t have a car like that.’ When you watch these videos, I think it actually ends up stressing people out rather than lifting them up. So I was trying to get away from that with ‘Dollar.’”

“That song definitely checks a lot of boxes for us,” notes Matthew with obvious pride.

“I Got the Money” continues that theme of checked aspirations (“Keep that money for yourself/I don’t need that type of wealth”) and while “1 4 Me” is the kind of top-down jam you want to hear while riding shotgun with your life-partner, it also hides an added layer for those who want to find it. “I don’t even believe in a Christian god, but it’s about having faith… faith in something bigger than yourself,” says Asa.

The songs that make up KIN were mostly written at Asa’s home in Los Angeles home and if the album sounds like summer in the city, that’s because it was. “I don’t have air conditioning,” he says. “I have a little thermometer in my studio which often reads over 100 degrees and a few times hit almost 120 because of all the old musical equipment. I would usually keep a cold bath and intermittently jump in a few times a day.”

Opting to work with friends as opposed to big name producers, Asa and Matthew returned to their previous collaborator Lars Stalfors, who mixed and co-produced in his North Hollywood studio. But the real test came back in Asa’s home, where the boys would crowd test the material during parties and barbecues attended by their nearest and dearest, including members of Haim, Sir Sly, HEALTH, and others in the stylistically disparate Los Angeles musical community.

“That was the tipping point,” adds Asa of the family atmosphere that birthed KIN. “I have a tendency to second guess everything I write, but it was during these moments of watching our friends dancing and enjoying the songs that I reconsidered.”

The good times need good time music. But the not-so good-times need it even more. 2019 has very little chill. Information, opinions, stimulus, are all exhaustingly constant. Both Asa and Matthew felt the need for some kind of respite from the confusion, so they made their own, and gravitated towards others that were seeking the same.

But Electric Guest have attracted followers from the start. After Asa and Matthew’s initial collaborations as roommates, the two formed the group in 2011 and worked their way towards success with the tuneful touch of their 2012 debut album Mondo (co-produced by close friend and mentor Brian “Danger Mouse” Burton) and the laid-back funk of single “This Head I Hold.” But they soon began to suffer a minor case of the second album syndrome. An initial set of songs was scrapped, and the full follow-up Plural didn’t arrive until 2017.

Asa’s drive to create goes far beyond his group. Over the years, he has contributed musical pieces to TV shows including Saturday Night Live, The Simpsons, American Dad. Aside from working with Jepsen and Portugal. The Man, he also landed credits on Anime’s “Campfire” and Melvv’s “Anything Else.” Asa and Matthew also teamed up to help Cold War Kids pen a number of tracks, including their 2019 comeback single “Complainer.” In the last decade, you’ve heard something by the members of Electric Guest — whether you know it, or not. Matthew also co-wrote “Feels Right,” the group’s collaboration with Carly Rae Jepsen.

But after enjoying the success of their hit-making magic, Asa and Matthew have reconvened for their main gig with some firm ideas. “We both love early 2000s pop music, and the way those songs sound,” adds Asa, referring to the genre-agnostic TRL-era that incorporated everything from Lenny Kravitz to Justin Timberlake. “We wanted to do something with that energy but put our own spin on it. I wanted to be nostalgic without being retro.”

This time around, they had the benefit of experience, too. “It came easier this time because I think we remembered to have fun” adds Matthew. And if you don’t believe them, just ask their KIN.

After first coming to attention with Danish-language hip-hop septet Flødeklinikken, Soleima spread her wings and embarked upon a solo project which unites world music rhythms, unconventional R&B and energised electro-pop. Her debut mini-album / EP ‘No. 14’ earned widespread praise from music and fashion media, while Radio 1’s Annie Mac highlighted Soleima as a New Name. In 2017 Soleima won Talent of the Year at the major Danish award ceremony P3 Guld and was also nominated for Best Newcomer at the Danish Music Awards.