Before We Begin World Tour 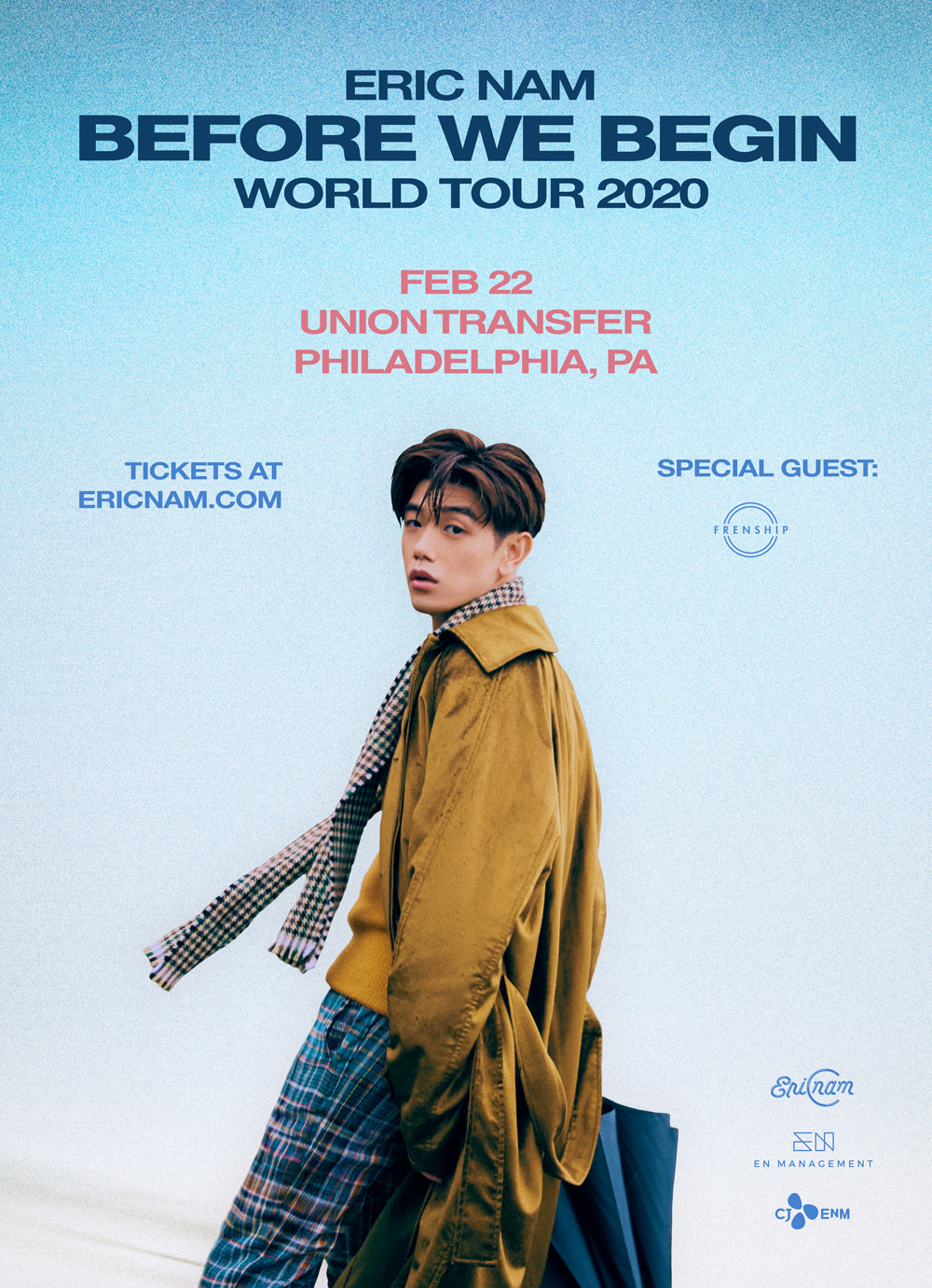 A regular in Korea’s music scene, Eric has promoted two mini albums and multiple singles in Korea. He has charted at #1 on several occasions and held shows in the U.A.E., Australia, Canada, Malaysia, Morocco, and the United States.

In June 2016, Eric released his first U.S. single, “Into You” in collaboration with electronic band KOLAJ. “Into You” premiered worldwide on Beats 1 Radio and The Fader, which subsequently led to a #1 charting on Hype Machine. Following the success of this track, he received coverage from outlets such as Buzzfeed, NBC News, Fuse TV, Fusion, MILK, refinery29, USA Today, TIME Magazine and more. He is currently working on releasing more music in the U.S. and hopes to continue pushing boundaries in both markets.

In addition to music, Eric is also active on television. For the last 3 years, Eric was the main host of Arirang TV’s most popular program, “After School Club,” broadcast in 190 countries gaining thousands of fans internationally. Today, Eric continues to make appearances on many of Korea’s top rated and popular TV and radio shows, including hosting “Saturday Night Live,” “Running Man,” “Hello Counselor,” “CultTwo Show,” and many more. He is currently a regular on MBC’s international hit, “We Got Married.”

Eric is fluent in English and Korean, and is highly proficient in Spanish and Mandarin. He is an avid foodie and photographer and hopes to continue bridging the gap between the East and West through exciting cross-cultural projects.

FRENSHIP make wide-angle pop songs that are realized in the moment, shaped by diverse inspirations: the brash, bold innocence of 80s pop; the experimental streak of 90s hip-hop; and, not to mention, the songwriting chops of stadium-filling superstars. Their songs are painted in bold, bright colors, packed with harmonies and unshakeable hooks that connect with a global audience. FRENSHIP’s latest single “Wanted A Name” (feat. Yoke Lore), released via Counter Records (part of the Ninja Tune family), follows the explosive interest which has greeted the music they have released so far.

FRENSHIP – James Sunderland and Brett Hite – released their debut track “Kids” in 2013, and in 2015 released “Knives” featuring Norweigan producer, Matoma. They were three years into their musical journey together when their 2016 breakout hit “Capsize” with Emily Warren proved to be a game-changing moment that skyrocketed FRENSHIP to new heights. The track has notched up over 600 million streams so far (adding to their 750+ million total streams), garnered multiple gold and platinum certifications around the world, and saw them picked as Spotify’s #2 Breakout Artist in 2016 and one of Shazam’s 2017 Emerging Artists. It received huge radio play, too, hitting #1 on Z100 NY and #2 on KIIS FM LA, and received press support in the US and internationally from Billboard, NYLON, V, Idolator, The Independent, Wonderland and more. This success spurred a whirlwind of tour dates across the US and Europe, including festival plays at Lollapalooza, Outside Lands and Life Is Beautiful as well as a support slot for Bastille performing to crowds of thousands on stages either side of the Atlantic. Following “Capsize,” FRENSHIP released a string of successful singles, including “1000 Nights” which they performed on Jimmy Kimmel Live.

“We remember feeling like we finally made it,” shares Sunderland. “It felt damn good. We never could’ve predicted it taking off like it did. It’s a great feeling knowing it connected with so many people because that’s our goal: to share our music with as many people as possible. Most importantly, Capsize gave us hope again. It gave us the energy to push FRENSHIP forward into a lifetime career.”

Touring with Bastille in 2017 also marked an important evolution in FRENSHIP’s perspective. Playing their biggest venues yet where the crowds were showing their support all the way to the back row was pivotal for the band.

“It changed everything for us,” remarks Sunderland, explaining how, as bedroom producers and songwriters, it helped put in perspective who they were writing for, and helped show them what to strive for.

The tour with Bastille also served as a spark for their striking new 2019 single “Wanted A Name,” a collaboration with friend and fellow songwriter, Yoke Lore, that was written when they returned home from their first headlining tour in 2018. Rousing and undeniable, the propulsive sonics and soaring melody of “Wanted a Name” give way to musings on if the elusive feelings of love, acceptance and validation will ever be re-captured again.

“We love the interaction with our fans when we’re on the road,” says Hite, “The love and appreciation is flowing but, when the tour is over, it’s easy to wonder if that feeling will ever happen again. It can be an isolating feeling trying to figure out how to turn those amazing moments into something that will last.” Adds Sunderland, “Our lives revolve around writing, touring and perfecting every element of what you see and hear from us, which fuels us and brings us happiness. In the midst of focusing on that, we don’t want to lose sight of what made us start making music in the first place. This song is an attempt to regain that original feeling of pure excitement of sharing our music with the world.”

Los Angeles – the city that the duo calls home – is a place they say provides them with daily inspiration — and motivation. It’s also a spur to achieve their goals: the urban sprawl around them can feel constricting and frustrating, amplifying the pressures of being an artist. Ultimately, though, it encourages them to work hard on making the best songs they can.

“It’s a huge driving force,” explains Sunderland, “We’ve both been through some of our highest and lowest moments in this city. For me, it’s where I found love, it’s where that ended and I found love again. It’s where I joined a cult for a few years and completely lost sight of myself and my identity and it’s where I healed from that. It’s where I found my artistic voice and of course it’s where we started FRENSHIP and developed as artists together. All of those experiences have of course influenced our music and show. LA is full of opportunity, but it’s a place that can sometimes suck the life out of you and make you crave a break. We write about that break a lot and wanting to escape from LA and get back to simpler times in Colorado and Washington. That said, we wouldn’t be who we are without this place.”

It was LA that first brought Sunderland and Hite together. They first met when they were both working at an athletics store. They quickly discovered that they share upbringings where playing sports was a huge part of their lives. They balanced music practice with soccer training as they grew up, an activity that they say has taught them lessons in rebounding from setbacks. Sunderland started playing drums when he was eight years old, watching his shadow on the wall in the basement as he would drum for hours, and began singing in choirs. “I remember getting goosebumps when I was a part of big group of people singing together. That feeling influences how I want our music to sound and feel,” he says. Hite became interested in music around the same age. Whenever a favorite song of his would play on his alarm clock he would turn it as loud as possible and press the whole radio up to his ear to consume as much of the sound as possible.

They met in 2013 at a time when they were both at a crossroads with their music, and quickly struck up a connection. Hite had spent several years as a solo singer-songwriter. Sunderland had experience in film scoring and music production as well a choral upbringing – his mother was an opera singer. In many ways, they had totally different musical tastes, with Hite’s affinity for – amongst other things – Hawaiian music and punk rock, and Sunderland’s admiration for the B-52s and Peter Gabriel. Despite a few differences, the two share an infectious sense of humor and a relatability that ignited a lifelong friendship.

It’s through this connection that they found a common language for writing songs together. Initially, Hite focused on lyrics and vocals, with Sunderland on production. Over time they’ve spread all aspects of the music-making between the two of them, which includes stacking up vocals and melodies tuned to resonate at our most sensitive frequencies. They draw influence from music recorded in the 80s, where a flood of new technology gave people lots of new toys to play with, making big and bombastic music that boldly threw new ideas into the mix.

Ultimately, FRENSHIP hopes that their music can be a welcoming place and travel with people throughout their lives.

“We want people to be able revisit our songs in 5, 10, 15 years and feel like they’re catching up with an old friend that they haven’t seen in a while,” Sunderland leaves off.

“It’s really important to us that everyone feels comfortable to be themselves at our shows, which hopefully translates out into the real world as well,” adds Hite. “In a world that can sometimes seem to be spiraling towards self-destruction, we want to keep a sense of hope and optimism alive.”