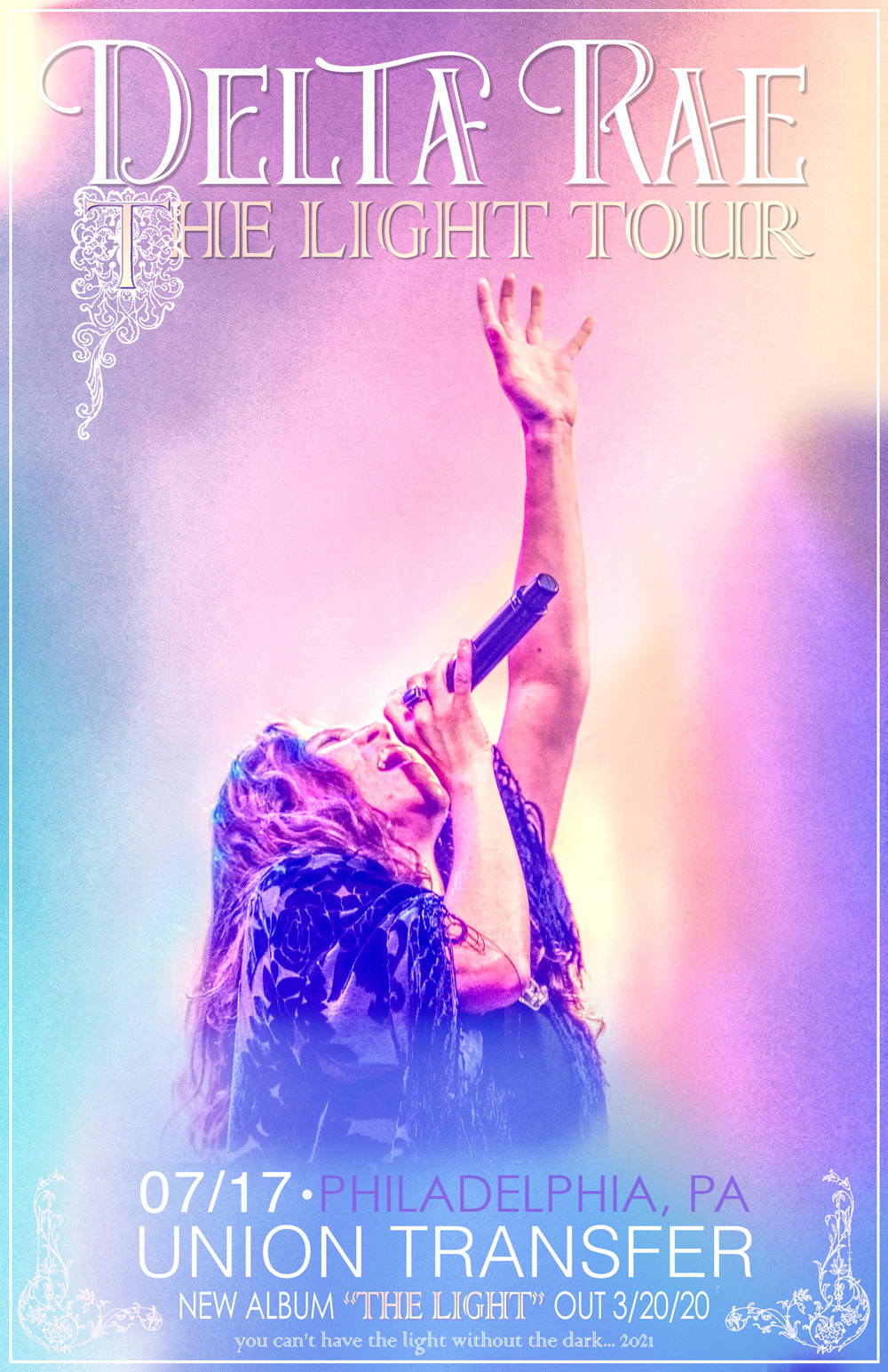 Buy Tickets
Friday, July 17
Show | 7:30pm // Doors | 7pm
$25
Hello! We hope everyone is staying safe out there. Wanted to let you know that the originally scheduled April 10th show with Delta Rae has been moved to July 17th. All existing tickets for the new date will be honored! If you cannot make the new date, we are happy to refund you. Refund requests must be made by April 2nd. Thank you for your patience and understanding! xo, Union Transfer
RSVP on Facebook

Formed in 2009 as a four-piece around the talents of siblings Ian, Eric, and Brittany Hölljes, along with Elizabeth Hopkins, the North Carolina-based band expanded to a sextet the following year with the additions of Mike McKee and Grant Emerson.

In 2011 the group inked a deal with Sire/Warner Bros. after a particularly impressive in-office audition for Seymour Stein, who was blown away by Hopkins and the Hölljes siblings’ powerful voices. The resulting Carry the Fire, their major-label debut, arrived in 2012. Carry the Fire reached 11 on the U.S. Heatseekers chart and 13 on the folk chart.

Delta Rae released their second album, After It All, in the spring of 2015. In 2017, the band signed with Big Machine Label Group and released an EP, A Long and Happy Life, which featured the hit single of the same name. They just announced they are working on their third and fourth albums:

The Light and The Dark.

Frances Cone is a Nashville based soulful indie band. For someone with deep familial roots in opera and classical music, founder Christina Cone seems preternaturally capable of writing songs focused on capturing the insane, unthinking fireworks of the human heart. Anxiety. Heartbreak. Transcendent love. The secrets of a diary so sacred and precious it only exists internally, every word an eyes-shut-tight whisper. To create music like that, such as on their forthcoming album ‘Late Riser’, takes actual, emotional bravery. It takes a level of empathy and love that stays locked and unavailable in most people. Luckily, Christina and her multi-instrumentalist musical and life partner Andrew Doherty found each other in Brooklyn NY a few years ago and all the locks failed. They started creating what would become half of ‘Late Riser’. Between them there was just enough courage to hold hands and jump.

They landed in Nashville, TN and immediately found a home in the city’s thriving alternative scene. There were challenges and successes and lots of hard work but all along the songs kept coming. Music lovers at Noisey, Billboard, Stereogum, and Brooklyn Vegan among others began to take notice. NPR invited the band to perform at their Tiny Desk concert series and they garnered more than 12 million streams on Spotify. The seed of a musical identity first hinted at on Cone’s 2013 release ‘Come Back’ blossomed into something unignorable and meaningful. After years of patience and perseverance, ‘Late Riser’ was finally finished. The record is a testament to what modern pop music is capable of when imbued with honesty and emotion so palpable you can taste it in your mouth. It’s not opera, and it’s not the result of any calculation or outside influence. It is pure feeling: watching a fireworks display through happy tears.

No stranger to change or the journey that comes with it, Carrie Welling has been behind the wheel of her musical experience from a young age. The newly minted indie pop songstress has carved a remarkable path of sound and story, with all roads leading to her recent rebirth as a solo artist in Nashville, TN. Her bold, rich voice, reminiscent of Natalie Maines and Stevie Nicks, is upstaged only by the genuine love and confidence this natural performer exudes on stage.

Melodies rich in country roots, paired with edgy rock lyrics drenched in Welling’s city-bred past are stunningly showcased in “The Edge,” Welling’s latest EP, produced by Dave Pittenger and crowd-funded through independent artist ambassador, Pledge Music. From the arena-pleasing, empowering track, “How To Lose Him,” to the vulnerably honest, “Some Kind of Vulture,” fans of all ages and musical tastes will find a piece of themselves in Welling’s work.