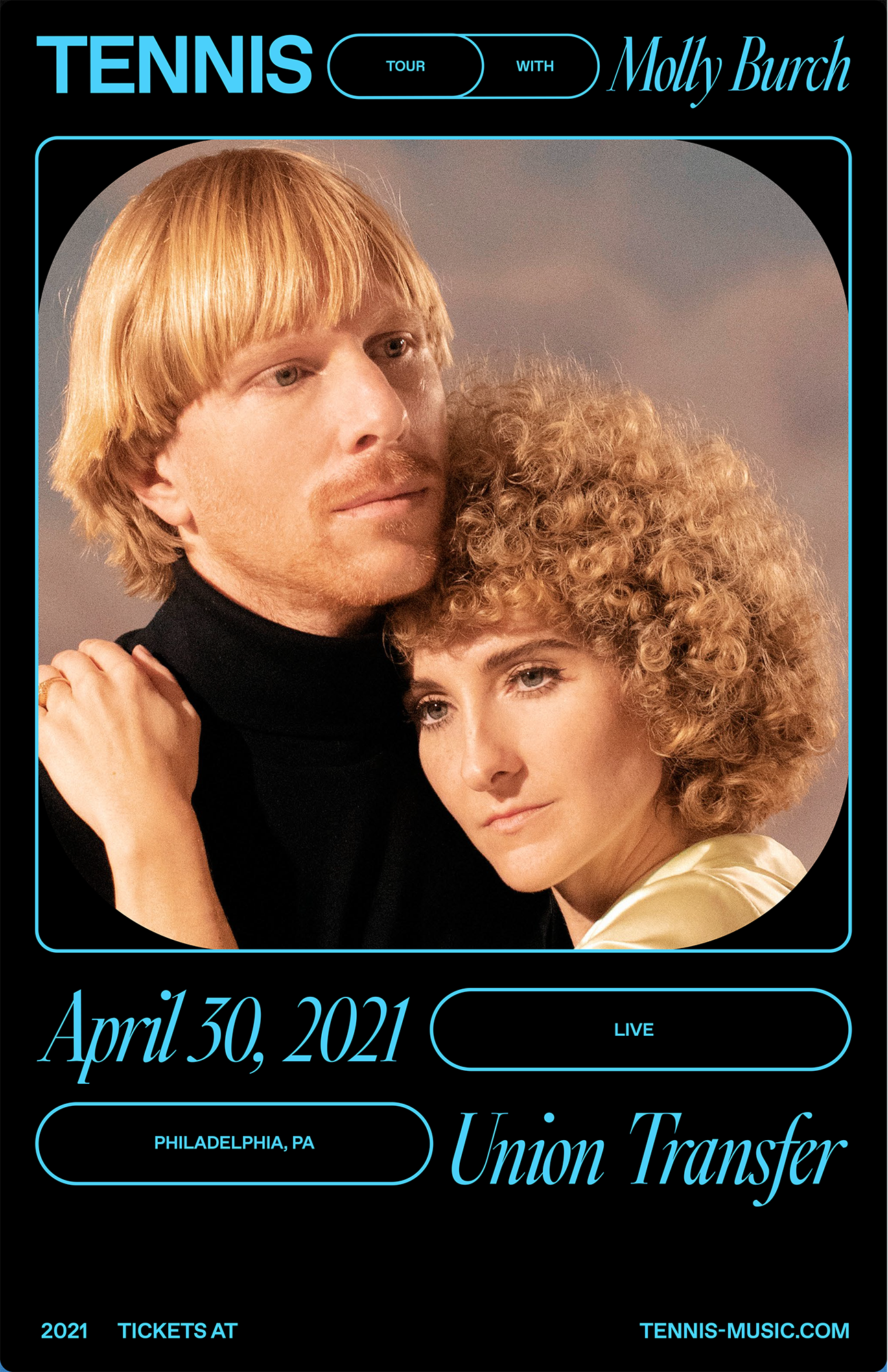 Buy Tickets
Friday, April 30
Show | 8:30pm // Doors | 7:30pm
$20
The originally scheduled April 30th show with Tennis has been moved to April 30th, 2021. Your previous tickets will be honored for the new date! You do not need to do anything different! If you cannot make the new date, we are happy to offer a variety of exchange options. Requests must be made by July 29th. For the quickest response, e-mail us directly at info@utphilly.com.
RSVP on Facebook

I never learned how to swim.

In years of sailing, I never let the water touch me. The ocean was an abstract dread, an obliterating void as untenable as outer space.

In January 2018 we went on tour. After years of scraping by, we found our footing with our fourth record Yours Conditionally. It was a commercial success that set us up to to play the biggest rooms of our career. But three shows in, I developed a raging case of influenza. Each night I dragged myself onstage and croaked out the set in a delirium. After a particularly bad soundcheck, Patrick asked me if we should cancel the show. I couldn’t imagine giving up the thing we’d work so hard to achieve. “I’ll be on stage even if you have to mic my coffin,” I joked.

The next morning I fainted and had a seizure while grocery shopping for breakfast. Patrick carried me through the check-out lanes screaming for a doctor. I woke later in a hospital bed. Patrick leaned over me, crying. “That’s it,” he said. “I’m canceling the tour. I thought you were dead. We’re quitting the band. I’m going to be an accountant.” But I was on the mend. We missed two shows and pressed on.

During sound check at the 930 club, Patrick stepped out to take a phone call. His father had been in the hospital all week, but he had cancer and brief hospitalizations were routine. Back at the hotel that night, Patrick poured two shots of whiskey and handed me one. “I’d like to toast my dad.” He said. “The doctors offered to put him on life-support to give me a chance to fly out there, but I didn’t want him to suffer. Instead I said goodbye.”

Patrick went home to grieve with his family and rejoined us on the road two days later. I couldn’t believe how quickly our lives had unraveled in the midst of what was supposed to be a milestone in our career. As the tour continued, we found refuge in playing music together. Songwriting had always been an extension of our inner-world. Now we retreated to that world every time we stepped onstage.

After the final show of our tour in Austin, we received another phone call. Patrick’s mother Karen was in the hospital on the brink of a stroke. We got on a plane and went straight to her bedside. Her recovery took weeks. In the hospital waiting room, I wrote the opening line of “Matrimony II”: I only have certainty when you hold my hand.

On a hot July day, after Karen’s return to good health, we sailed as a family into the Pacific and scattered Edward’s ashes at sea. I marked our position on the chart with a small x. The album was already well under way. In that moment, I realized what I wanted to call it.

Swimmer is a tour of the darkest time in our lives. But it is not a dark record. Named for the feeling of suspension and upendedness that characterized this period, it is the story of deep-rooted companionship strengthened by pain and loss. These songs carried us through our grief. It is us at our most vulnerable, so we kept a small footprint, recording everything ourselves in our home studio. I set out to describe the love I have come to know after ten years of marriage, when you can no longer remember your life before that person, when the spark of early attraction has been replaced by a gravitational pull.

In a small-town South of Austin, Texas vocalist and songwriter Molly Burch is relaxing in her sunny country home. The 27-year-old is enjoying the calm before the storm that will kick start when her much anticipated sophomore album First Flower hits the public. The Los Angeles native has found tranquility in the outskirts of Texas, appreciating time on the front porch as cicadas sing in the distance behind her.

Burch burst onto the music scene in 2017 with her debut album Please Be Mine, a ten-track ode to unrequited romance that she wrote after studying Jazz Vocal Performance at the University of North Carolina in Asheville. Please Be Mine earned praise from critics for her smoky, effortless vocals and bleeding-heart lyrics.

“I was really blown away with how many people told me that the music has helped them through their own break-up,” she says of Please Be Mine. “I was just so moved by that. I never expected it. I was aware that people were actually listening to my music and having a positive experience, so [with the next album] I wanted to reveal my own struggles with fear and anxiety.”

After a year of touring Please Be Mine all over North America, Europe and the UK, Burch returned to Texas to decompress. All of a sudden, she was devoid of stimulation with nothing but time on her hands.

“I was scared of not being able to write a great follow-up album,” Burch admits. “I was in that state, but I had so much time that slowly I was able to get some music out of myself. I would force myself to write every day. I gave myself a regiment. Once I got a few songs, then I had the confidence to keep going.”

Burch bounced her ideas off her bandmate and boyfriend Dailey Toliver who would contribute guitar parts and orchestration suggestions. The hurricanes kept them locked at home, where they forced themselves to record demos and pump out as much material as possible. Slowly, the album took shape and First Flower became real. When it came time to record, Burch chose to work with Erik Wofford at Cacophony Recorders in Austin.

First Flower is a walk-through Burch’s most intimate thoughts. Unlike Please Be Mine, which focused on the contentious depression of heartbreak, First Flower explores broken friendships, her relationship to her sister, and, more importantly, how Burch learned to fight overwhelming anxiety. Burch is a soft-spoken, careful person who shoves her nervousness away on a daily basis.

“I feel like people don’t see me as a nervous person,” Burch says. “They don’t realize how nervous I am. I am good at fighting past my inner anxieties. I struggle with the anticipation of experiences.”

First Flower is a bright, beautiful album peppered with moments of triumph. Burch’s voice is as strong and dexterous as ever, displaying her incredible range and professionalism as a vocalist. Opening track “Candy” is a swinging, playful hit, while “Wild” deals with pushing away fear. Songs like “Next to Me” and “Dangerous Place” examine failure and distance, and the title track “First Flower” is classic Burch, a simple love song that makes your skin raise with goosebumps when she breaks into the chorus. But the album’s true stand-out is “To The Boys”, a courageous, sassy fuck-you to her own self-deprecation where she learns to love all the things she hated about herself. “I don’t need to scream to get my point across/I don’t need to yell to know that I’m the boss,” she coos over a sparse guitar riff.  “I’ve always been told my whole life to speak up,” explains Burch. “I needed to embrace that and not care what people think.”

The album closes with “Every Little Thing”, a haunting, airy ballad that sounds like something Judy Garland would have sang while drowning her pain in pills and alcohol. First Flower is a shapely sonic stage to let Burch shine on. The composition and production carefully constructed to compliment and not over power.

“I do not have the answers by any means, but I wanted to talk about those imperfections,” says Burch. “I wouldn’t want someone who listens to my music to think that I have it all figured out. I don’t. First Flower is me being transparent.”