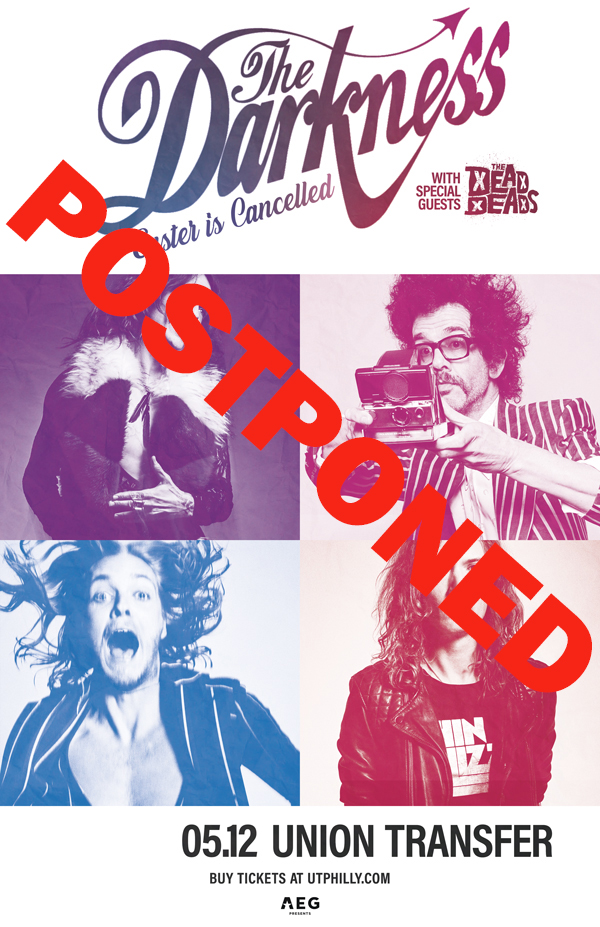 Postponed
Tuesday, May 12
Show | 8pm // Doors | 7pm
The May 12th Darkness show at Union Transfer has been postponed to a date to be determined - All tickets for the new date will be honored - If you cannot make the new date, we will refund your ticket - Please wait until the new date is announced (unless the original concert date has passed) to inquire about a refund - Thank you for your patience and understanding!
RSVP on Facebook

The Darkness are a UK rock band currently eeking out an existence on the periphery of the world music scene. Surrounded by a team of highly paid professional technicians, our heroes battle irrelevance in obscurity, paying themselves a meagre minimum wage so as to keep it real.

The Darkness’ live performances have become legendary. Or mythological.
The absence of an official live DVD means you have to witness a show first hand before you are entitled to slag it off. Then, and only then, may you slag it off. I wager you won’t, because the Darkness will make you shit in your pants, in a good way.

I should know. I’m the singer.

The Dead Deads are comprised of a pair of siblings and three childhood best friends who came together for a girls’ jam night that turned into much more.  Audiences may be curious as they see five girls with X’s painted over their eyes appear on stage, but once the wall of sound washes over them, they are transfixed and spirited away into the dark and magical world of The Dead Deads.

Heads bang as metal and grunge riffs are beaten into submission by relentless, often bombastic rhythms.  Sister harmonies, brutal growls and finely crafted wordplay force unexpected stops and odd time signatures into undeniable hooks creating a new brand of drum-driven rock–brutal, silly and sublime.  The Dead Deads explore sounds from 90’s bands like The Pixies and Sonic Youth, to modern metal bands like Mastodon and Baroness, all while keeping their grunge/punk rock roots. The girls name Nirvana, Failure, Glassjaw, NOFX, Neurosis, Weezer, Helmet, Beck and The Melvins in amongst their hugely diverse list of influences.

In December 2014 they wrapped their first national tour with Halestorm, dramatically growing their fanbase through their wild live show and warmth with their “dead corps” at meet and greets.  Their debut full-length record “Rainbeau” produced by Brian Carter at Paradox and mixed by Matt Mahaffey/sElf was recorded live to tape in three days and released in November to rave reviews calling the album, “the weirdest wonderland of accessible punk and rock you’ve heard in awhile,” and “one of the better albums of the year.” “Rainbeau” went on to win a Best Rock Album in the Nashville Music Awards.

Named by The Nashville Scene as a band to watch in 2015, the band continued to grow: They christened the new Nashville venue, Basement East, played a live on-air gig for WRLT at legendary listening room 3rd & Lindsley, broke crowd number records at Riverbend Festival in Chattanooga, played a sold-out hometown show with Evanescence on their triumphant return, and partied down on Motorhead’s Motorboat cruise with the likes of Motorhead, Slayer, Anthrax, Suicidal Tendencies, Huntress, and Crobot.

In 2016, the band continued their winning streak, playing the ShipRocked cruise with 5-Finger Death Punch, Seether, Halestorm, and Helmet where they quickly became fan favorites. The Dead Deads also participated in the all-star band The Stowaways with members of All That Remains, Halestorm, Halo Method, P.O.D., Nonpoint, Guns ‘n’ Roses, Megadeth, Art of Dying and many more.

It’s not just fun and games anymore.  The Dead Deads are on a righteous rock ‘n’ roll mission.  Get to know them and get hip to the agenda.