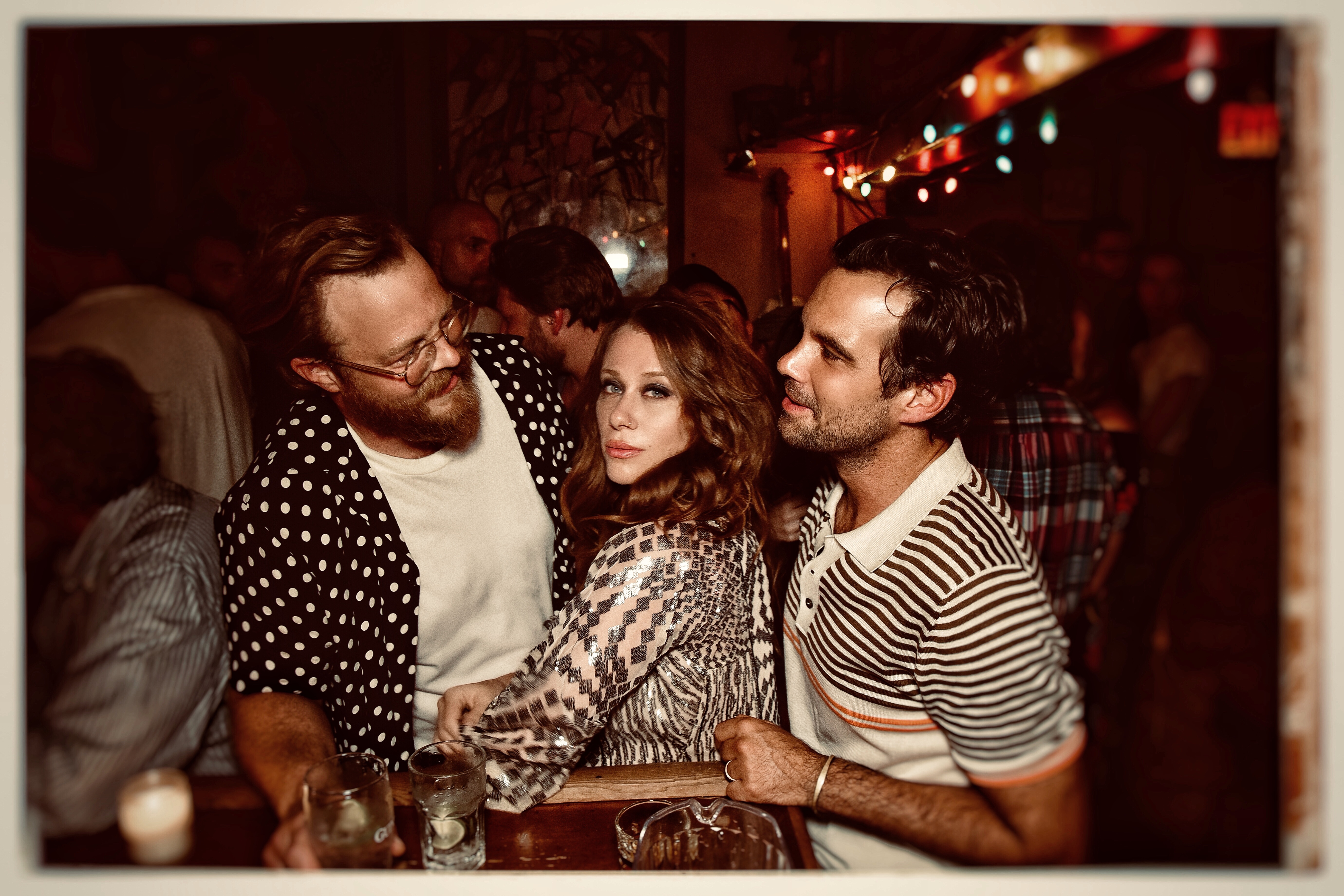 Buy Tickets
Wednesday, November 17
Show | 8:30pm // Doors | 7:30pm
$27
The originally scheduled March 28th show with The Lone Bellow has been moved to November 17th, 2021! Your previous tickets will be honored for the new date. You do not need to do anything different — just show up with your ticket(s) on the night of the show! Any questions, please e-mail us direct at info@utphilly.com.
RSVP on Facebook

It’s been six years since The Lone Bellow was first formed by Zach Williams, multi-instrumentalist Kanene Donehey Pipkin and guitarist Brian Elmquist. But one only needs to get the lead singer and guitarist speaking to their songwriting process to witness firsthand just how passionate he remains about its teeming creativity. “It’s a beautiful process,” the effusive singer says of the almost epiphany-like manner in which the band typically translates its vivid ideas to melodies and lyrics. “You’re trying to figure out exactly what it is you’re trying to say. And then, ‘Bam! Lightning strikes, everybody’s in the room, and it’s like the heavens open. Suddenly you’re able to write a song.”

The Lone Bellow, which also now includes Jason Pipkin on keys/bass, has long nurtured a deep and highly personal connection with their music. But with Walk Into A Storm, their third studio album, due on September 15 via Descendant Records/ Sony Music Masterworks, the band turned inward like never before. “We covered such a broad range of emotion on the album,” Elmquist says of the raw, intimate and undeniably soulful Dave Cobb-produced LP recorded in Nashville’s famed RCA Studio A. The 10-track album, Elmquist says, is centered on “the human condition and how you’re trying to connect with it,” and with stunning tracks including “Is It Ever Gonna Be Easy?” and “Long Way To Go,” it features some of the band’s most poignant material to date.

When creating the follow-up to 2014’s cherished Then Came The Morning, the band confronted — and ultimately overcame — a host of personal obstacles: not only did all the members and their respective families work through a relocation from New York City to Nashville, but on the day they were to begin recording the album Elmquist entered a rehab facility for issues stemming from alcohol abuse. “There’s a thousand different ways this could have gone down but it’s the way it did,” says Elmquist, says the tumultuous experience helped “put what we’re doing in perspective.” “I got to see the love and friendship we have for each other in action. I’m thankful.”

“Our band was the receiver of a lot of grace and kindness from the music community,” Williams adds, citing peers and industry folks offering words of encouragement as well as the non-profit MusicCares greatly aiding in the costs of the guitarist’s treatment.

Elmquist’s situation presented a logistical challenge for the band — they now had nine days to record instead of the pre-planned 20. But as Pipkin notes, the sacrifice “paled in comparison to what we have with each other. Without our friendships we don’t have anything,” she says. “That’s the reason we do this. To forge ahead without taking care of each other doesn’t work. We wouldn’t be able to do what we do.”

Working with the notoriously no-nonsense Cobb (Chris Stapleton, Sturgill Simpson, Jason Isbell), was a richly rewarding process. It was also one that helped the band kick out the jams in short order. “There’s no real bells and whistles,” Elmquist recalls of Cobb’s no-frills recording process. “You go practice a song, play it, record it and put it on a record.”

The results are stunning: from the orchestral, uplifting “May You Be Well,” to “Long Way To Go,” a beatific piano-anchored ballad Elmquist wrote while in rehab; and “Between The Lines,” a harmony-drenched sing-along Williams says acts as both a letter to Elmquist and an exploration of the push-pull of drawing art from pain.

“There’s this lie that the only good and worthy art that can be made has to come from tragedy and darkness,” Williams offers. “And I get it. But it doesn’t only have to come from that. It can also come from joy and gratitude.”

And that’s exactly what The Lone Bellow is full of as they look to the future. The band kicks off an extensive tour on September 21st with Central Park’s Summerstage supporting The Head and the Heart. And as they crisscross North America they’ll have a new member in tow. “‘How early is too early to teach a child how to tune guitars?’” Pipkin, whose newborn son will be joining them on the road, asks with a laugh. “It’s going to be really exciting and different.”

Williams seems nothing short of in awe of where life has taken him and his band. The process that led to Storm, the forthcoming tour, the deepening of bonds with his band mates — it all adds up to The Lone Bellow “becoming even more like family,” he says. “I just love being able to have that opportunity with these friends.

The singer pauses, and with a supreme sense of contentment in his voice, notes proudly of his band mates: “They’re pretty good musicians. But they’re truly amazing people.”

A few years ago, Early James stumbled home, “drunk, or in some kind of state” and started doing dishes. When he woke up the next morning, the young man did not have a clean kitchen, but, he’d soon realize, he did have a song. Almost immediately, James began writing “Dishes in the Dark,” a sober self-reflection about trying, and failing, to clean your act up. “This dirt, this dust, this rust/It’s what I’m all about,” he sings over a sparse acoustic guitar. “I won’t wash up/I’ll just wash out.”

Singing For My Supper, the debut album from Early James, is full of those types of poignant, straight-from-real-life-to-the-page stories. Early James has lived a long life for a 26 year-old, a life he can’t help but end up turning into art. Songs keep spilling out of him: Songs about addiction, songs about familial reckoning, songs about mental health, songs about the ways adulthood can rob us of childhood wonder. For someone raised largely by the women in his family in Southeastern Alabama, Early James, whose mother worked 12-hour shifts as a traveling nurse during his upbringing, never expected that he’d get to become a professional artist, and he doesn’t plan on wasting a second.

James’ first album is a riotous blend of styles and sounds, the type of wise-behind-their-years debut offering that makes one stop to wonder how a 22 year-old could possibly contain so much world-weary wisdom. “Blue Pill Blues” details a harrowing four-five month period when James, who was being treated for depression, quit his antipsychotic medication cold turkey. “High Horse” is a lament of the ways his adolescent excitement faded with the arrival of the vices of adulthood. “I can’t remember the last time I climbed I tree,” he sings with a world of despair, “Now when I’m high, there ain’t much that I want to see.” “Easter Eggs,” meanwhile, finds the songwriter coming to terms with some of the darker sides of his familial inheritance, a prime example of James’ ability to pack a lifetime of questions into a single couplet:

“Southern sadness from days of yore,” he sings, “Jesus Christ, when it rains it really pours.”

The album’s wide-ranging ten songs span a blend of hard-charging blues, wistful folk and ages-old pop crooning anchored by the singer’s once-in-a-lifetime voice, which can oscillate from gravel-gruff shout to honey-smooth whisper.

“Some people are good singers,” says the Black Keys’ Dan Auerbach, who decided he needed to produce the singer’s debut album at his Easy Eye Sound studio after watching just two seconds of a video of him performing. “And some people are better than good singers, they just have this great form of expression.”

James’ voice conjures a century’s worth of American barkers and crooners, from Alan Lomax field recordings to mid-century iconoclasts like Billy Holliday and Howlin Wolf to ghostly late-century interpreters like Fiona Apple and Tom Waits. But James wasn’t simply born with such a voice; he’s entirely uninterested, in fact, in that myth. “I hated my voice for a long time,” he says. “I didn’t used to believe my voice when I heard it. It sounded like me, and I know I’m a liar, so I couldn’t believe it.”

Using prickly-poet heroes like Apple and Waits as inspirations, James realized he could arrive at a greater emotional truth if he just tried to conjure up the voice he heard in his head. Long before he ever discovered his own voice, though, Early James’ soul was full of music. He can hardly remember a time when he wasn’t obsessed with song. As a young child growing up in Troy, a small community in Southeast, AL that James says was plagued with “Walmart disease,” he would start singing “Take It Easy” by the Eagles to strangers while waiting in the checkout line with his family at the grocery store. His life was changed forever when, at age six, he witnessed a local musician who’d been hired to play covers perform at a family function at his grandmother’s house.

His life changed once again when, as a preteen, he discovered the music of Hank Williams Sr, whose music he began to sing in the shower every night. Then came the teenage years: grunge, Pearl Jam, Soundgarden, Nirvana. After asking for a guitar for Christmas several years in a row, his Aunt finally gifted him one at age 15. His uncle taught him how to play \“\Mary Had A Little Lamb,” and James was off to the races. “I just didn’t stop,” he says of his high school years spent locked away in his room playing guitar.

As soon as he was old enough, Early James moved to Birmingham, where he’s become an integral part of the city’s thriving music scene over the past half-decade. “Everything in Nashville is so competitive and clique-ish and cutthroat,” he says, “But Birmingham is the greatest fucking scene in the world. It’s a weird melting pot.” In town, James plays in “like five other bands”: bluegrass outfits, folk collectives, alt-country groups. “I just try to convince people to let me play guitar for them.”

James’ diverse experience in the Birmingham scene has helped mold him into a singular talent, an artist whose sound remains entirely uncategorizable. “The biggest compliment we get,” James says, “Is, ‘I was confused by your set. I don’t really know what genre to put y’all in.’”

Coming out of a local music scene as first-rate as Birmingham has also helped sculpted James into a songwriter who obsesses over the craft and texture of every word he’s ever sung. “Every line has to mean something to him, personally,” says Auerbach. “It’s not good enough to just write a good song, it needs to have a deeper meaning. He’s unlike any person I’ve ever worked with. He’s not writing a song to be universal; he’s writing a song for him.”